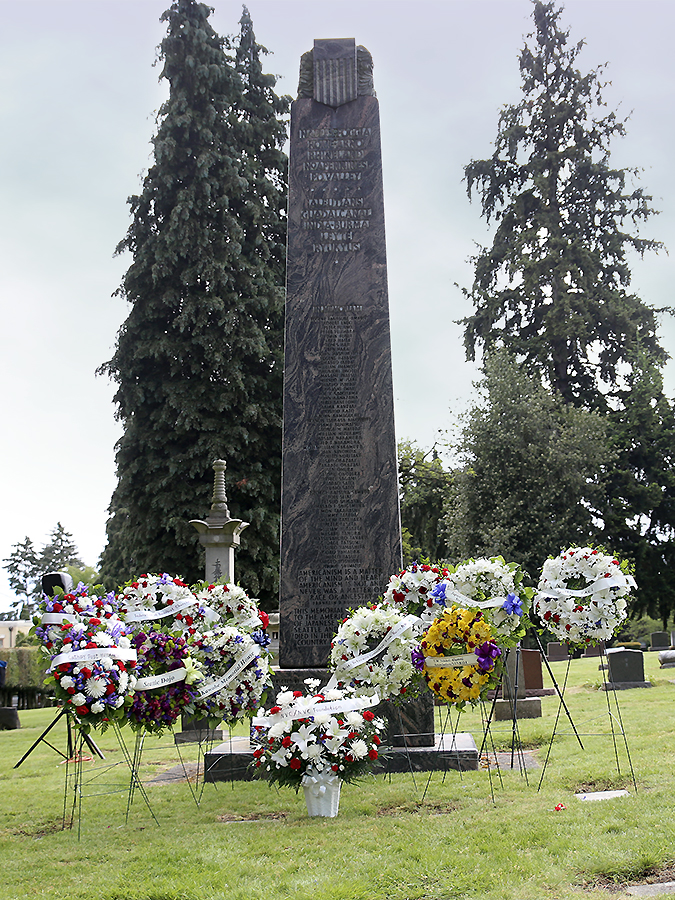 After a two-year COVID-19 pause to the in-person annual service, the NVC and NVC Foundation and its community of volunteers, supporters, and friends demonstrated strength and resilience to successfully commemorate the 77th Annual Nisei Veterans Memorial Day Service at Lake View Cemetery. It was one of the few recently held public events with participation, young and old, from our entire community (estimated attendance of 125+).  Special guests included: Washington Secretary of State Steve Hobbs (Ret. USA); Washington State Senator Bob Hasegawa, Washington State Representative Sharon Tomiko Santos; and recent French Legion of Honor Recipient Kim Muromoto, who stood and was appropriately recognized by the audience as the lone NVC WWII veteran in attendance. 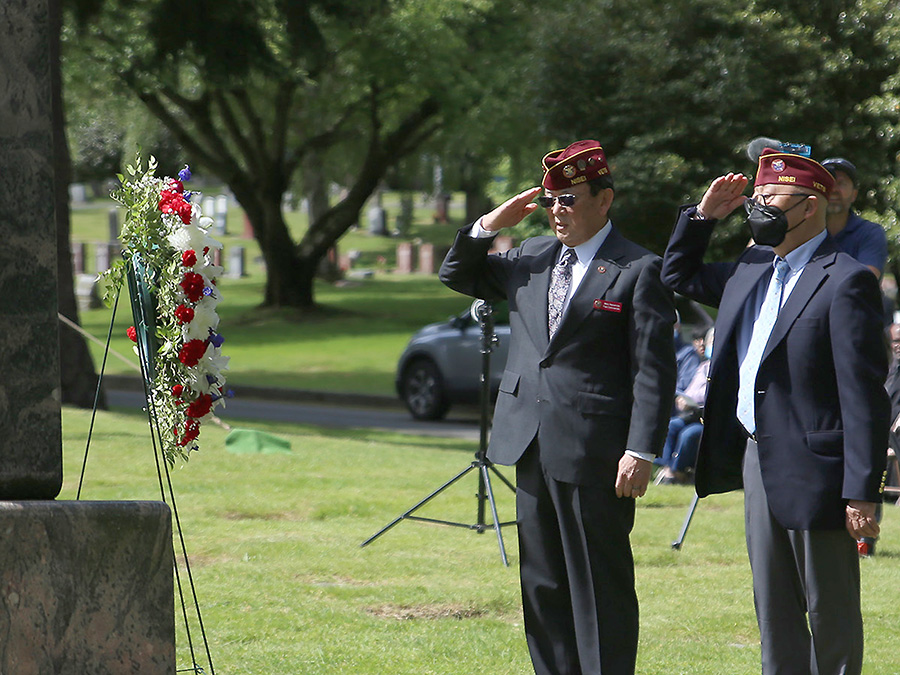 Moments before the start of the service, the sun peeked out from the clouds offering a welcoming warmth to the air. You could sense closeness and see the individual smiles as people greeted, embraced, and shook hands renewing valued personal friendships while establishing new ones. It was wonderful to see and feel human interaction once again, as well as witness the resumption of an NVC tradition to remember and honor the fallen soldiers from our community -- a tradition and legacy that must be embraced by future generations. 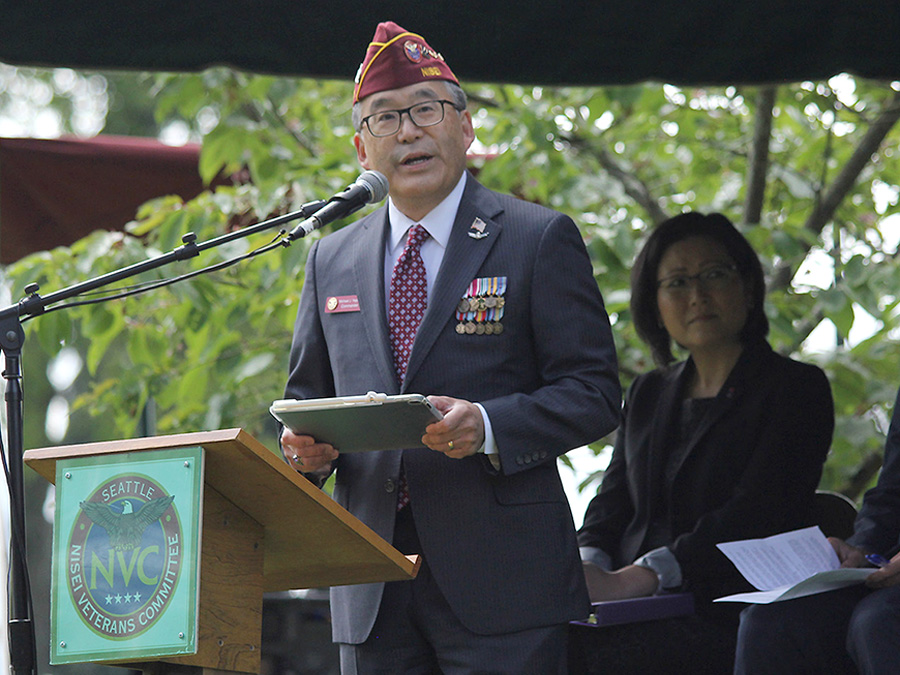 With energy and commitment, volunteers led by NVC Vice Commander Dale Kaku and long-time volunteer and truck provider Mark Hidaka of City Produce assembled in the early morning to pick-up, load, and set up the folding chairs graciously donated each year by the Seattle Betsuin Buddhist Temple. Each seat was placed to form a theater-like setting allowing every attendee a sightline to the service. Thank you, Set-Up Crew!!!

Traffic flowed smoothly into the cemetery as safe drop-offs of seniors close to the event location were carefully monitored, and parking was orderly due to the oversight and directions provided by Gary Matsudaira and his volunteer team -- not an easy task! Great work by the Traffic Control team. 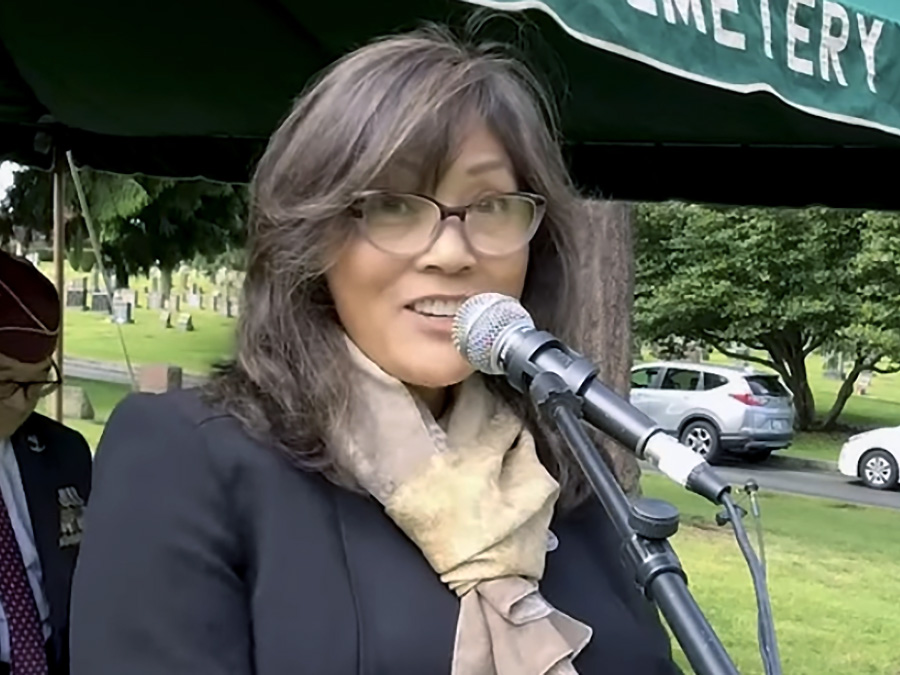 New Lake View Cemetery Manager Craig Lohr and his excellent grounds team once again provided the needed tents, stage, and labor at no cost to the NVC.  The entire grounds were well manicured and the area around the NVC Memorial was beautifully adorned, providing the perfect setting and ambiance.  We are fortunate and honored to have this strong and longstanding relationship with Lake View Cemetery that has spanned decades.

The professional sound system was strategically placed, tested, and fine-tuned by retired veteran Kevin MacCulley, President of AVR Productions. Each word spoken by the featured participants clearly resonated throughout the grounds. The equipment, time, and skillful oversight of the microphones and background music were all provided complimentary to the NVC. We extend our thanks to Kevin. 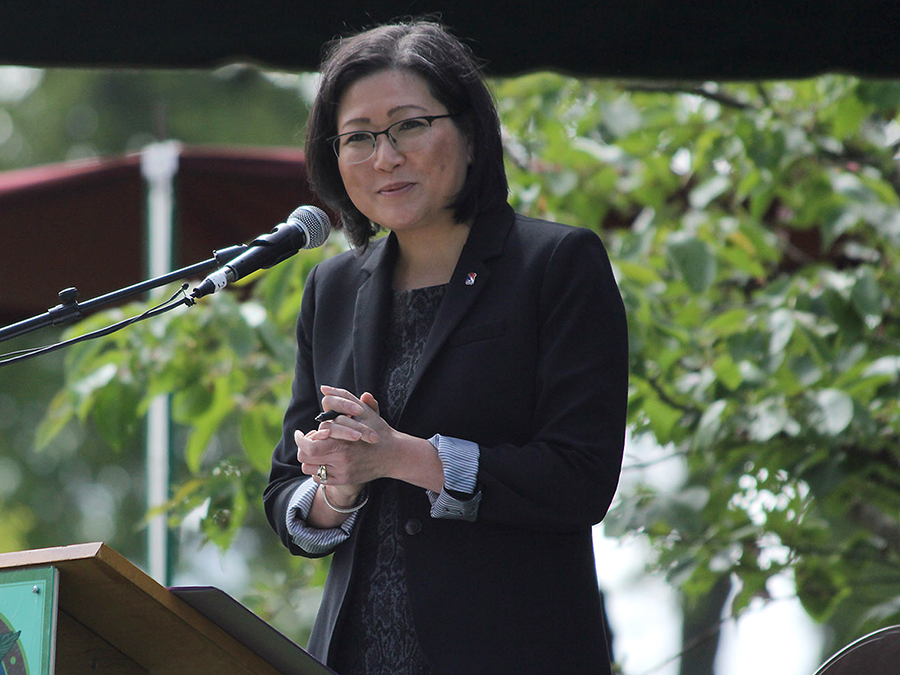 Colleen Fukui-Sketchley has served as NVC’s emcee for 17 years, and she delivered another fine performance as she welcomed the audience, called for the colors, introduced honored guests and participant to the podium, and provided the necessary background, emotions and feelings for the service. Many thanks to Colleen for her years of service as the emcee of the NVC Memorial Day Service.

Betsuin Buddhist Church Boy Scout Troop 252 led by Scout Master Corey Murata provided the ceremonial presentation and retiring of colors. Each scout arrived early to prepare their steps and cadence to this important procedure as they demonstrated professionalism beyond their years. Troop 252 Scouts were: Alexander Bertelsen, Sebastien Kaku, Theo Kaku, Danilo Murata, and Reese Tanabe. Also, Eagle Scout Ryan Seo of Troop 420 dutifully led the audience in the Pledge of Allegiance. The community is proud of these young leaders as they learn of the sacrifices made by soldiers who fought for our freedoms. Their demonstration of leadership and volunteer service are to be commended. 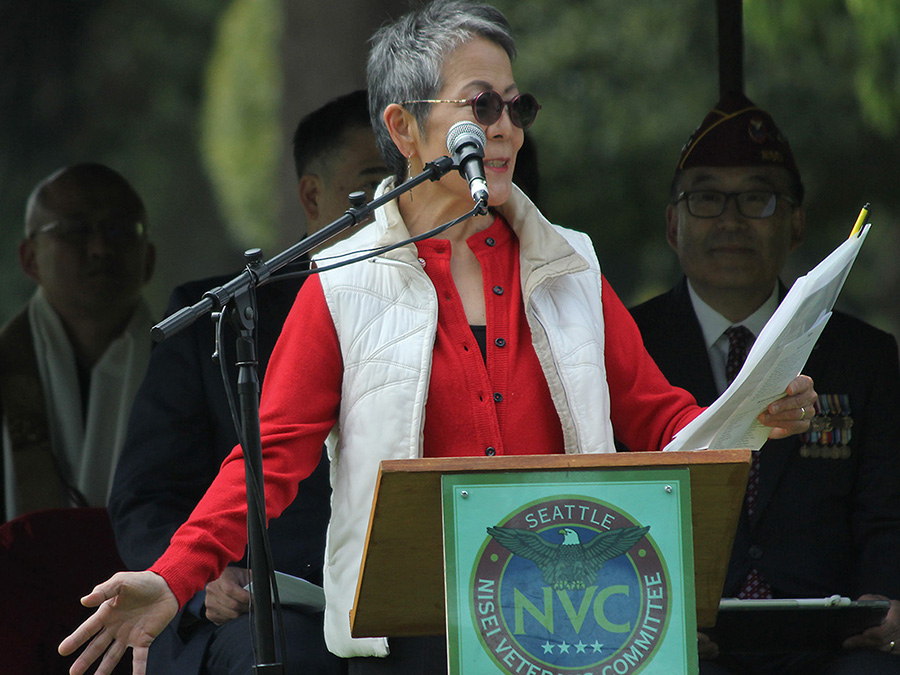 Singer Ryan Izutsu provided a powerful rendition of the National Anthem drawing heart-felt applause from the audience. The NVC is grateful and appreciative to Ryan, a tremendous community talent who graciously supports the NVC when asked to perform.

Each Memorial Day Service is solemn and unique, with tailored and carefully crafted messages and prayers delivered by clerics from the Christian Churches and Buddhist Temples. We thank the following: 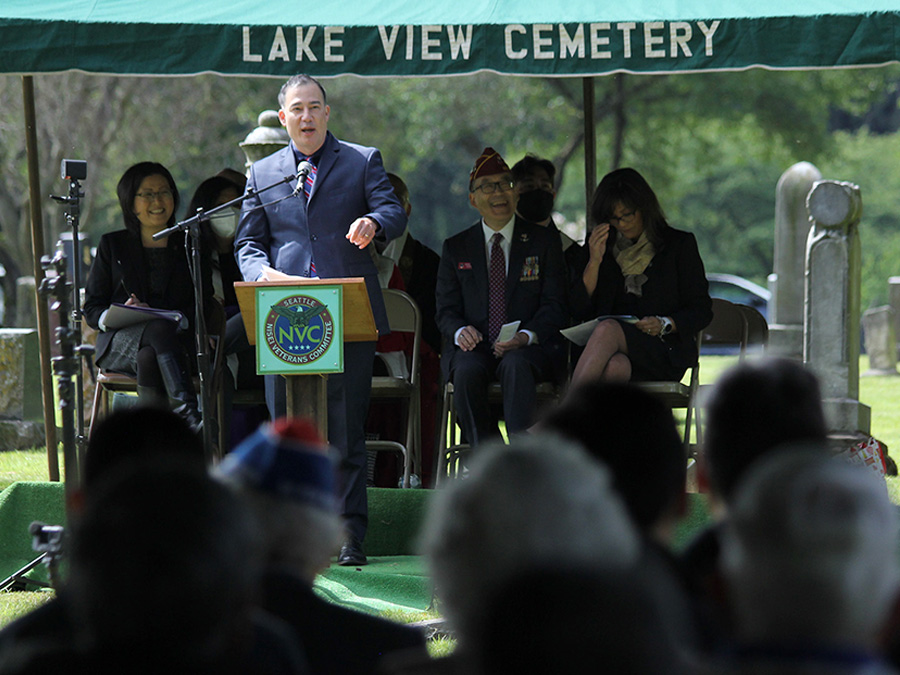 Utilizing his military background, NVC Commander, Lt Col Michael Yaguchi (Ret. USAF) provided an excellent welcome that recognized all in attendance while identifying the importance of the NVC Memorial Day Service to remember and honor the service and ultimate sacrifice of fallen soldiers from the Japanese American community, especially the Gold Star families who endured the loss of a family member. New NVC Foundation President Geri Lynne Nakao-Egeler also expressed her thanks to the NVC and the Foundation for continuing the Memorial Day tribute and offered a special recognition to all veterans, deceased and living, for their service to our country.  This was an opportunity for our leaders to meet and greet members of our community in person. We are very appreciative of their commitment and service and excited to support and join them in contributing to the bright future of the NVC and NVC Foundation. 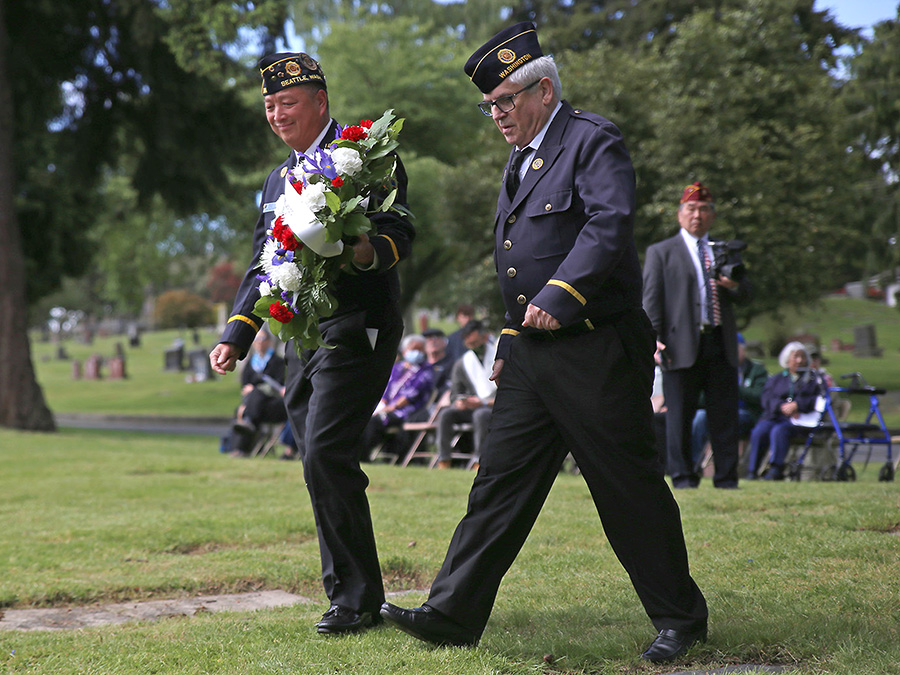 Honored guest speaker Washington Secretary of State Steve Hobbs, an active Lieutenant Colonel U.S. Army National Guard, provided a very personal and introspective account of his experience surviving a rocket attack while serving at a camp in Iraq and of losing personal friends -- soldiers with dreams cut short as combat casualties of war.  Hobbs thanked everyone for attending and understanding the meaning of Memorial Day as a day of reflection to remember those who died while fighting for our freedoms and serving our country.

Secretary Hobbs shared that he has spoken publicly at only two Memorial Day events, and that both were for the NVC to pay respects to his elders, to the fallen, and to honor his connectivity to the community. He paid special recognition to all NVC WWII soldiers such as Kim Muromoto who fought for our country despite having families incarcerated and living behind barb wires.  He also introduced a special fund to create a memorial for all Washington State born veterans killed in action, and for veterans who return home and require assistance.  (More to follow from the Office of the Washington Secretary of State.) We congratulate Secretary Hobbs on his new position and embrace him as a member of the NVC family. 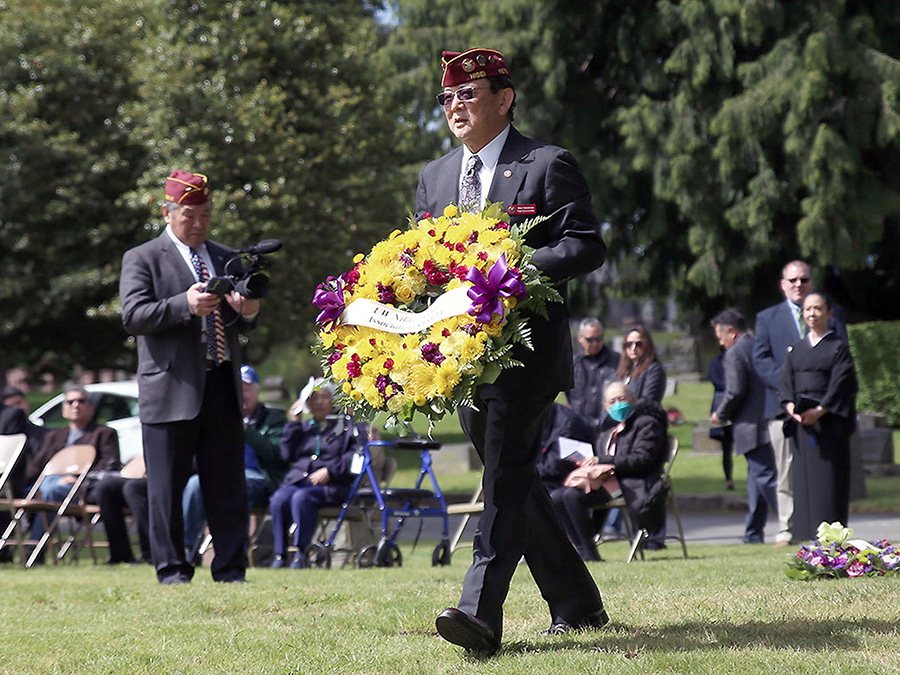 The NVC and NVC Foundation was honored by the attendance and participation of friends and supporters offering decorative floral wreaths. As the community wreaths were solemnly carried to the Memorial, one could imagine the flower petals as symbolic of the many individuals, families, and organizations who lost loved ones during war or conflict and their beauty symbolic of the honor, reverence, and remembrance we hold today. 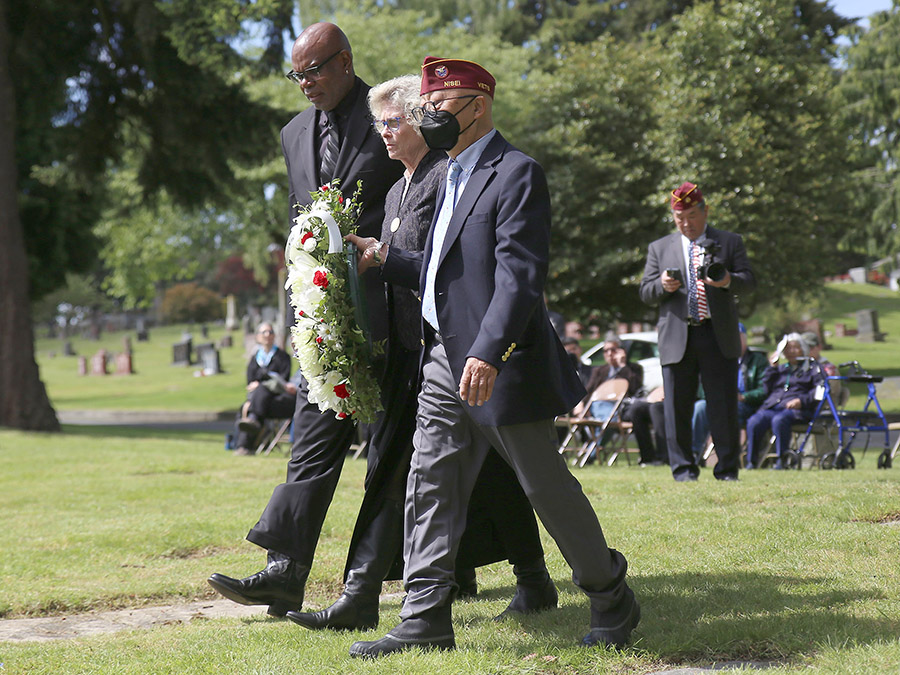 Federation of the Buddhist Churches of Seattle 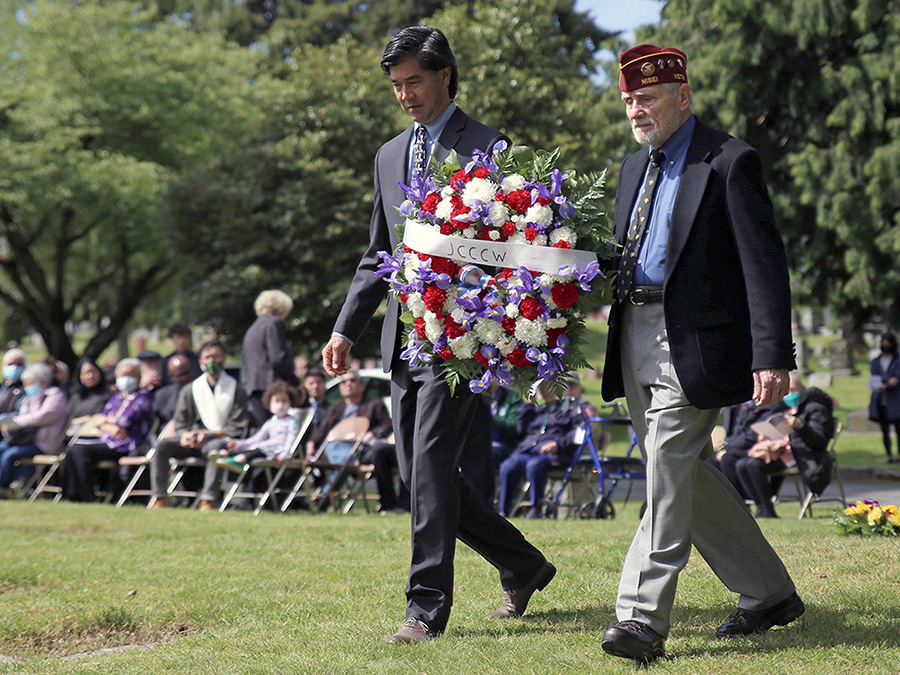 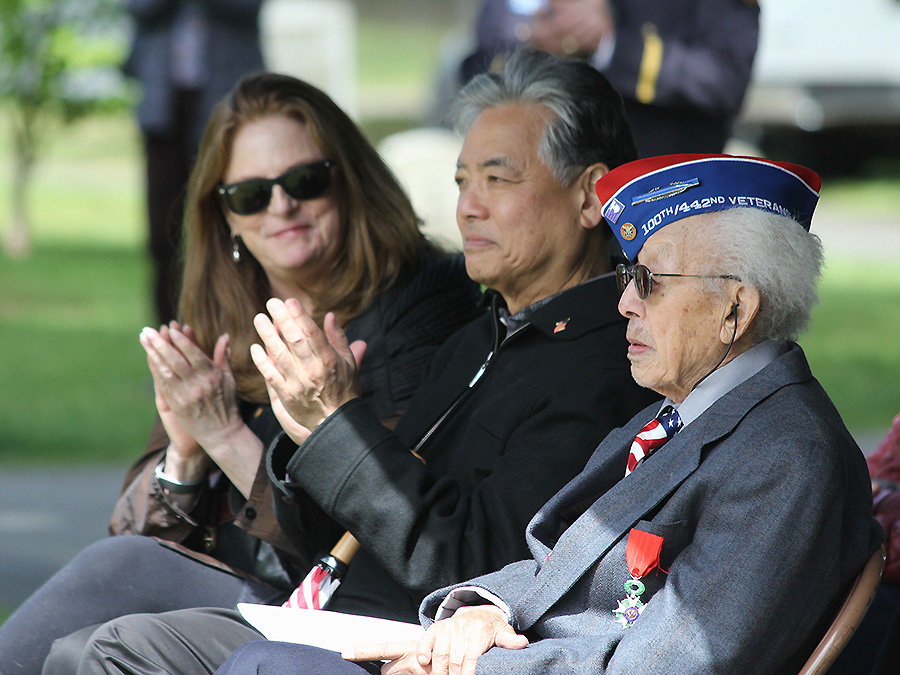 The playing of Taps and the retiring of the colors closed the 77th Annual NVC and NVC Foundation Memorial Day Service.

A special thanks to all the volunteers who worked tirelessly to contribute to the success of the event, as well as to all the participants and attendees.

Sadly, over the past two years many Nisei have passed away. It is extremely important for future generations to maintain this annual Memorial Day Service because the legacy of the Nisei Veterans must be remembered. Please mark your calendars and encourage your families and friends to attend next year. 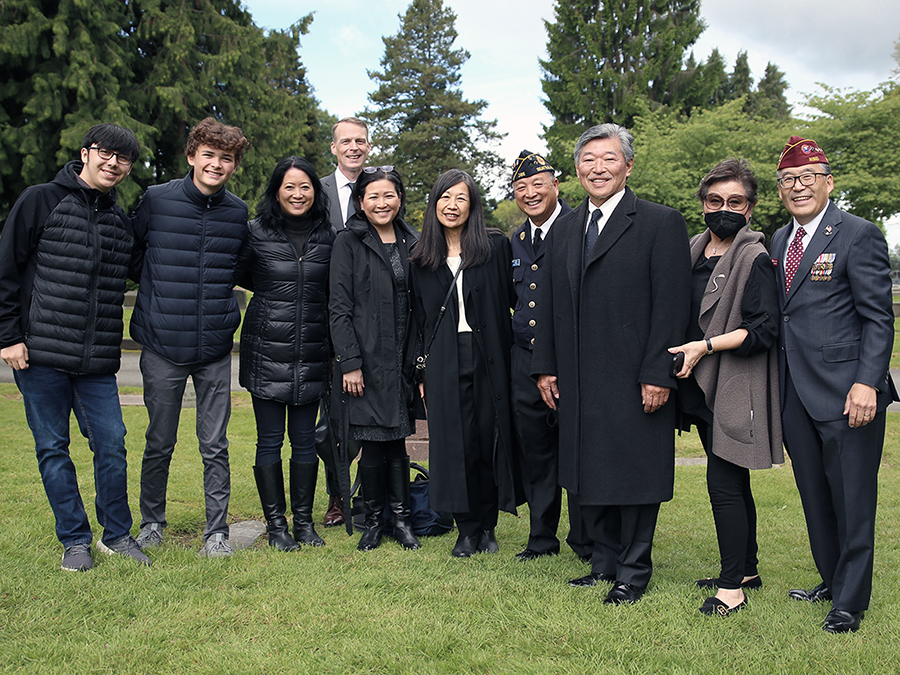