The National Veterans Network (NVN) hosted a three-day, after-hours event where invited guests were provided unrestricted access to all areas of the National Museum of the US Army (NMUSA) at Ft Belvoir, Virginia.  The museum is located about 20 minutes from Washington, DC.  Families of Nisei soldiers had waited over a year to finally tour this special exhibit and tribute to the Nisei veterans of WWII.  A much larger event was originally planned for April 2020 as a preview prior to the scheduled opening of NMUSA in July 2020 but was delayed because of the pandemic.  Many more WWII Nisei veterans and their families were planning to attend last year.  This year’s event used COVID safety protocols and procedures to keep attendees and organizers safe. 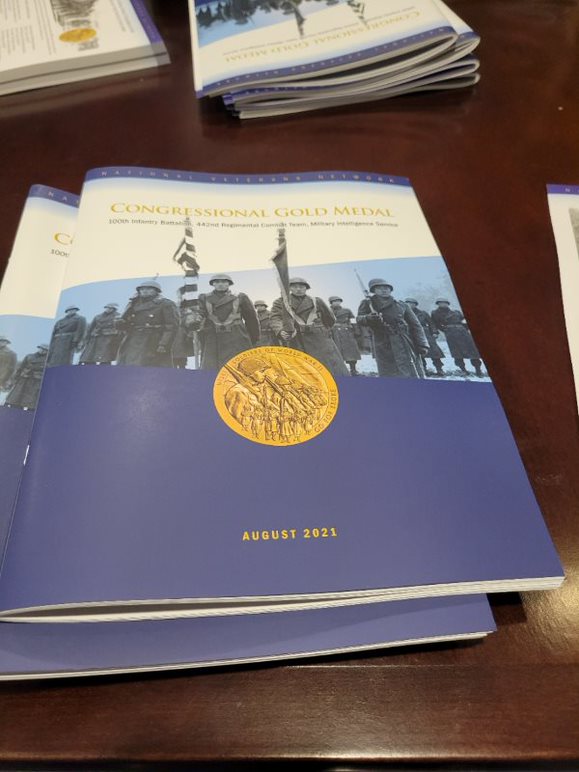 The Nisei Soldier Experience is a special exhibit dedicated to the Japanese American WWII soldiers of the 100th Infantry Battalion (100 INF BN), 442nd Regimental Combat Team (442 RCT), and the Military Intelligence Service (MIS). This exclusive exhibit displays the WWII Nisei Soldier Congressional Gold Medal (CGM), the most prestigious Congressional award given to civilians in the United States for achievements and contributions. The exhibit also features a display case of rare Nisei objects along with two video kiosks of object-based stories and European and Pacific Interactive Maps.

NVN worked closely with the leadership at Smithsonian Institutions’ National Museum of American History (NMAH), Army Historical Foundation (AHF), and NMUSA to ensure an exhibit about the Nisei Soldier experience during WWII would be available to nearly 3 million annual NMUSA visitors. The exhibit includes the CGM and will reside at NMUSA until 2024.

The first day was structured to have guests and organizers carry out health checks and registration at the hotel and then make their way to the first tours of the beautiful and modern museum.  The second day was additional registration and tours, and the first of several high-level speakers visited with the guests. 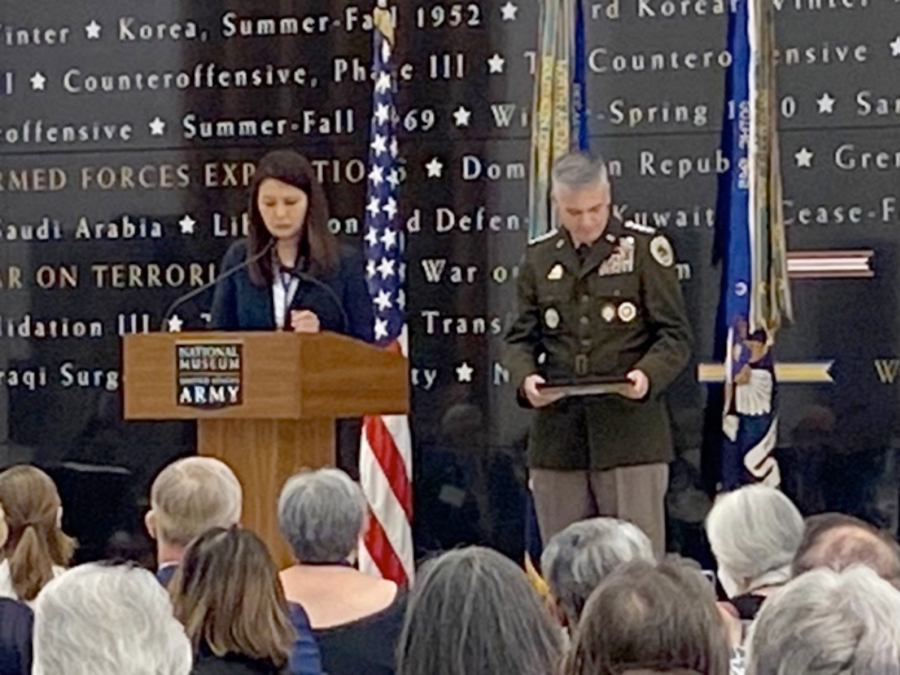 General (GEN) James McConville, 40th Chief of Staff-Army (CSA), met privately with the two WWII Nisei soldiers and the direct relatives of four Nisei Medal of Honor (MOH) recipients the afternoon of the second day.  The two WWII Nisei soldiers attending with their wives and family served in the Military Intelligence Service (MIS).  COL Charles and Helen Moriyama (Oahu HI), WWII Military Intelligence Service (MIS), and Ralph and Amy Matsumoto (Santa Clara CA area) were NVN’s honored guests. Several other 100th Battalion (BN), 442nd Regimental Combat Team (RCT); and MIS Nisei veterans cancelled their trips out of an abundance of caution due to the COVID-19 Delta variant. Several other families and guests cancelled their trips as well for the same reason.  One family, enroute to Washington DC, received a call at their Chicago layover that their Nisei veteran father had fallen gravely ill. They immediately returned home. 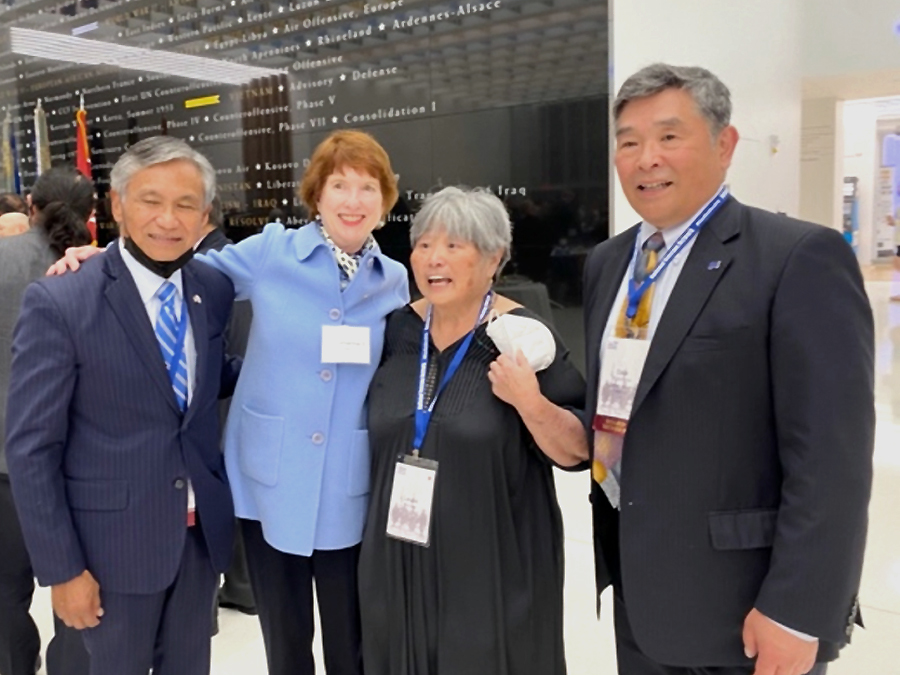 The celebratory dinner on the final evening was emceed by David Ono, news anchor at KABC, the ABC affiliate in the Los Angeles area.  The remarks from all the speakers who were directly involved in making this Nisei exhibit happen, expressed how important this story is in American history.  Representing the White House, Erika Moritsugu, read a letter from President Joe Biden and added her remarks on the importance of the Nisei soldier story in these challenging times.  Erika is the Deputy Assistant to the President and Asian American, Native Hawaiian and Pacific Islander Senior Liaison. Many were surprised to hear that two of her uncles, who served in the 442 RCT, were recipients of the Medal of Honor.

General Eric Shinseki, 34th Army Chief of Staff introduced the keynote speaker, General Paul Nakasone, USA, Commander, US Cyber Command; Director, National Security Agency (NSA); and Chief Central Security Service.  His comments were even more relevant as he is the son of an MIS soldier.  His father, COL “Bud” Nakasone was featured in a documentary titled, “The Registry”, featuring the late Grant Ichikawa (WWI MIS) along with local MISer, the late Roy Matsumoto. Mike Yaguchi is among those listed in the ending credits of this documentary.

At the end of GEN Nakasone’s speech, NVN presented him with a poster size first issue Nisei Soldier Stamp. Mementos were presented to Dr. Katherine Tobin for her advocacy within the USPS Citizens Stamp Advisory Committee to secure a USPS Commemorative Nisei Soldier Stamp. Many in the audience knew about the Stamp Our Story campaign, but only a few know about Dr. Tobin’s role to help secure this special and new “Forever” stamp. Ms. Tammy Call was presented a memento for her earnest efforts to understand the Nisei soldier story and relentless energy to secure exhibit space and funding too. 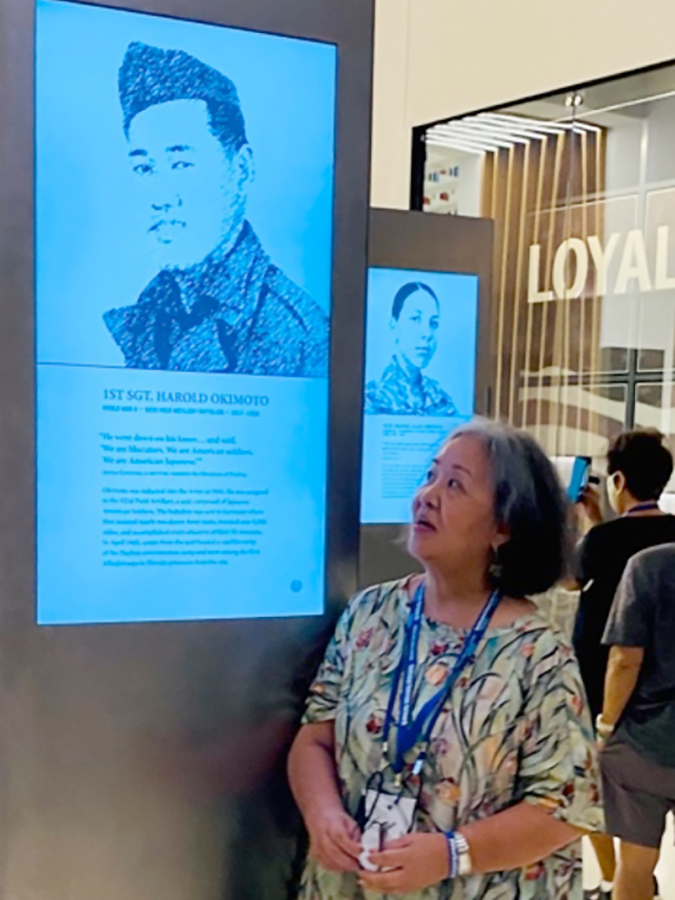 The project started with informal conversations in the early 2016 between the NVN; AHF; NMUSA; and the Army’s Center of Military History (CMH). A formal meeting with NMUSA’s project director, Ms. Tammy Call, and Dr. Charles Cureton, acting chief curator, CMH, occurred on August 11, 2016, at the Army’s Museum Support Center, Ft. Belvoir. Ms. Call was formally named as NMUSA’s director in November 2014. It is notable that funds to begin construction of the NMUSA and exhibit displays had yet to be submitted through the US Army; Department of Army; Office of the Secretary of Defense (OSD); Office of Management and Budget (OMB); the White House; and the US Congress. The Fiscal Year (FY) 2018 budget was likely in the budget pipeline, so meeting in mid- to late- 2016 for a proposed 2019 museum opening to also include a special Nisei Soldier Exhibit was quite ambitious at the time.

So much of the discussions occurred under an umbrella of fiscal uncertainty because the Museum’s budget had yet to be fully coordinated, finalized, and approved. There was some speculation that some, perhaps all, of the funding for a special exhibit would fall entirely on NVN. Fortunately, the slow federal budget process and quick NVN planning resolved most of the budgetary and legal review issues and the NMUSA was able to modify their FY2018 budget request to fund the vast majority of the special Nisei Soldier Experience exhibit. 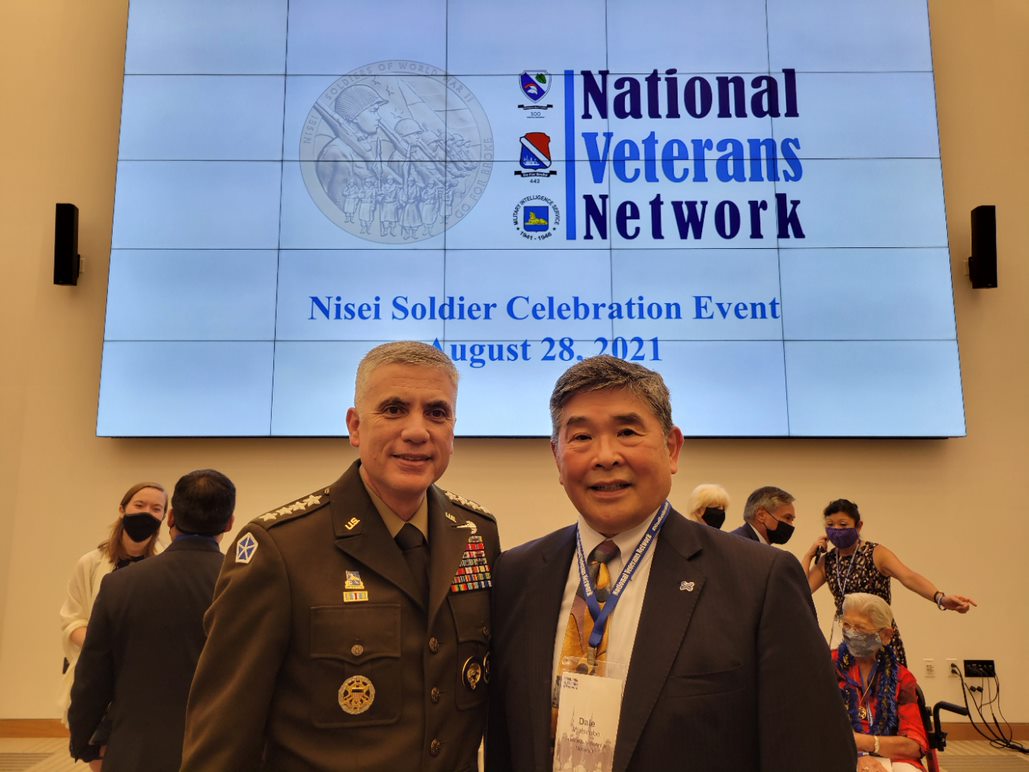 The visiting party then presented a formal briefing to the NVC, NVC Foundation (NVCF) membership, and the Japanese American (JA) community about NMUSA’s goals and plans to tell the story of the common everyday American soldier, and to include the story of the nearly 33,000 WWII Nisei soldiers and the 44 Nisei women of the Women’s Army Corp. Over the next several months, the aforementioned party visited JA veteran organizations and JA civic organizations in Alameda, CA; Chicago, IL; Honolulu, HI; Houston, TX; Oakland, CA; and San Francisco, CA. 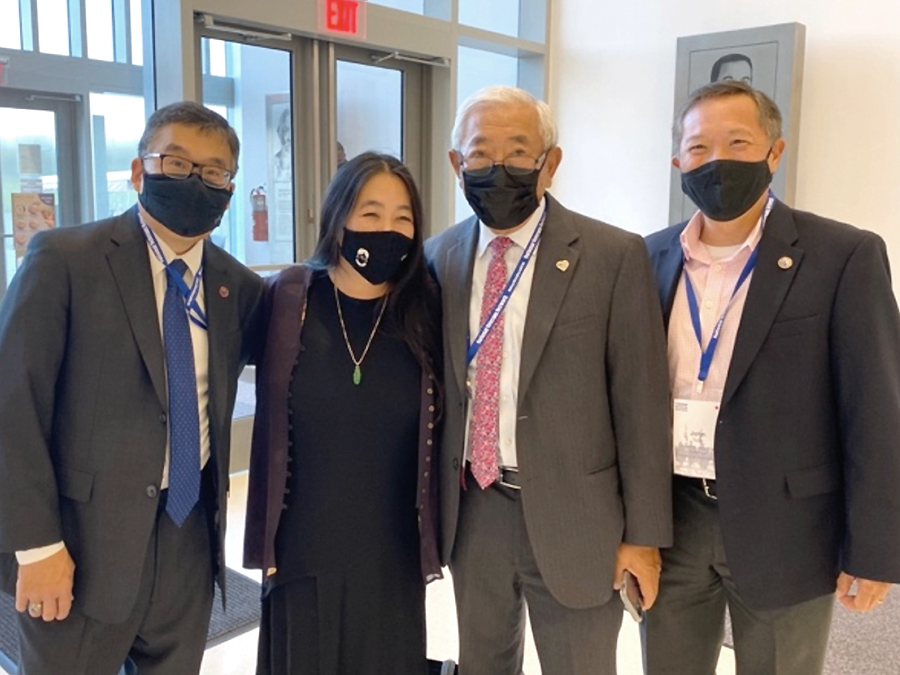 Part of the reason for sending the CGM on a seven-city tour after the 2010 national celebration in Washington, DC was to provide ample opportunity for NVN to work with SI to help design and raise funds to construct an informative CGM exhibit. Moreover, it helped ensure the CGM was kept out of SI archives. The seven-city tour also provided ample design time to produce digital online content that would be hosted on SI’s web servers (See http://cgm.smithsonianapa.org/). Because of NMAH renovation schedule and the absence of space to relocate the CGM display elsewhere, it became clear that NVN begin to discuss with SI and NMAH, the movement, temporarily, of the Nisei Soldier CGM to the special Nisei Soldier Experience exhibit at NMUSA until the NMAH renovation is completed. A legally- binding memorandum of agreement was signed between the NVN, AHF, and NMUSA.

The special exhibit of the Nisei soldiers will be at NMUSA until 2024. Go see it along with the rest of the exhibits and history of the U.S. Army.  Encourage others to go, especially those who are not familiar with the story.  We are fortunate to have several new ways to make more people aware with exciting new resources such as the USPS Go for Broke stamp and best-selling author Daniel James Brown’s “Facing the Mountain” book. 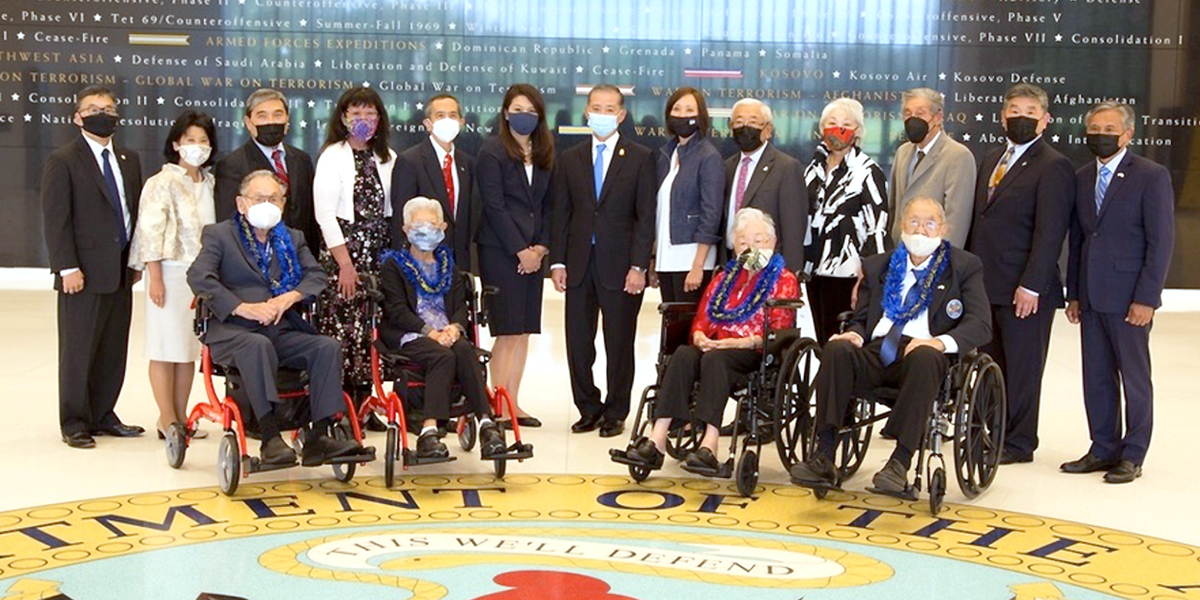 The NVC and members of the NVC Foundation have been well represented over the years from the inception of the project.  Most recently, Yuzo Tokita served on the NVN advisory board prior to myself.  My sister, Mari Watanabe, has been involved with NVN for the past 10 years in Portland and there are many others from other parts of the country (e.g., Hawaii, LA, Bay Area, Chicago, Houston, Philadelphia) who helped make this happen.  The NVC and the NVC Foundation have supported the NVN efforts and several NVC and NVCF members and families have contributed to making this Nisei soldier exhibit at NMUSA a reality.

Thank NVC Commander Michael Yaguchi for his work with NVN.  Yaguchi led the protocol planning effort for the entire project which included transportation plans for the two Nisei veterans and their families; staffing security and other support activity with the Ceremonies and Special Events Branch, Military District of Washington; Office of the Chief of Staff Army (OCSA); Office of the Commander, US Cyber Command and National Security Agency (NSA); Executive Office of the President, The White House; Army Historical Foundation (AHF); and the NMUSA.

As you can see, he played a significant role to make this Nisei soldier event and exhibit a success.  His knowledge of military protocol, his personal network of friends and professional contacts, and his passion about educating a broader audience on the Nisei soldier story makes him our MVP, in my opinion.  I’m glad he chose to return to Seattle after many years in the Air Force.  I hope we can keep him and his wife here and involved with the NVC and NVC Foundation.

Feedback received from a variety of guests was both abundant and positive and supports our conclusion that the event was very well executed from the attendee point of view. Additionally, this project set the stage for telling the Nisei soldier story to a national level audience. NMUSA estimates (pre-pandemic) visits to be over one million in the first year of operation growing to three million by the end of the third year of operation. NMUSA is listed on the Washington DC’s Places to Go tourist brochure, and Northern Virginia tourist handouts reflect NMUSA as a tourist destination too. The combined visits to all JA organizations across the country and Hawai’i, including the Japanese American National Museum and the Go For Broke National Education Center in Los Angeles, would not likely reach these large visit numbers.

According to LTG Schultz, President, Army Historical Foundation, the response he has seen from the general public to the material at the exhibit’s kiosks has filled a gap in visitors’ knowledge about the magnificent battle record and valor of the 100th, 442, and MIS.  It also enlightens visitors about the pre- and post-war environment the Nisei soldier and their families endured.

Finally, NVC’s participation in this NVN project is aligned with the NVC mission to promote and protect the American way of life as guaranteed and set forth by the Constitution of the United States; to perpetuate the historical preservation and sharing of the legacy of the NVC and to carry on the patriotic, social, charitable, and educational objectives as originally formed and organized.