Nisei Soldier Experience Exhibit at the National Museum of the U.S. Army

FORT BELVOIR, Va., Sept. 3, 2021 /PRNewswire/ -- Invited by the National Veterans Network to view the recently unveiled Nisei Soldier Experience exhibit at the National Museum of the U.S. Army at Fort Belvoir, VA, Japanese American WWII Nisei veterans Colonel (ret) Charles Moriyama, 96, of Honolulu, and Ralph Matsumoto, 100, of Paramount, Calif., traveled across the United States to visit the Museum and the historic exhibit. Although they had never met, they shared service to the United States as linguists in the U.S. Army's Military Intelligence Service during WWII. 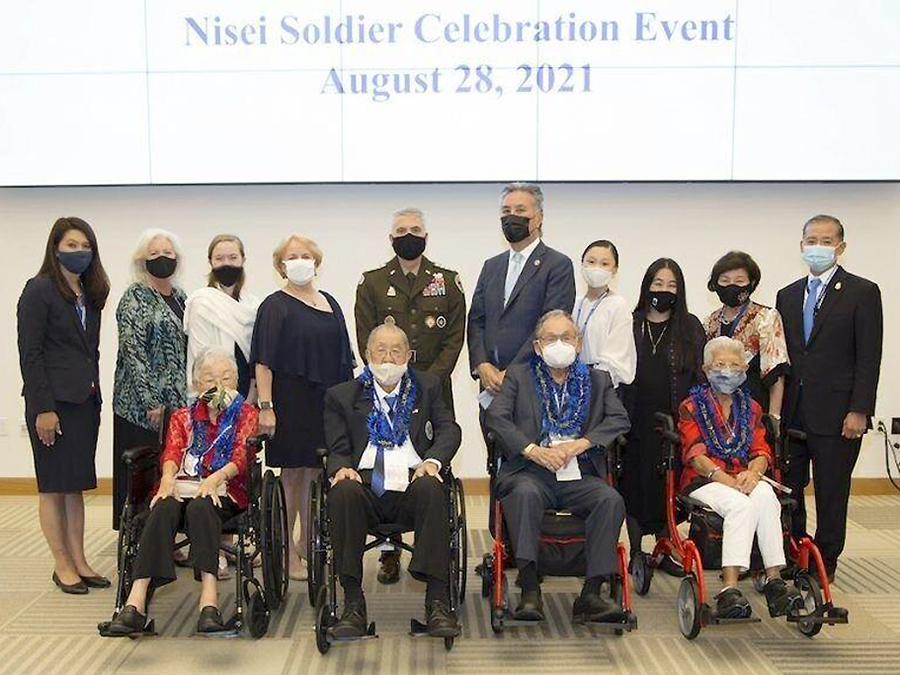 The Nisei Soldier Experience exhibit is the National Museum of the U.S. Army's first special exhibit that showcases an unprecedented collection of Japanese American artifacts that capture the rarely told story of the Japanese American Nisei Soldier during World War II. The exhibit highlights their struggles both at home and abroad, their courageous acts on the battlefield and their long-awaited recognition culminating in the Congressional Gold Medal awarded in 2011.

The importance of their service and the significance of the WWII veteran's visit the Museum was highlighted by multiple visits with high-level United States government officials.

Drafted in 1945, Nakasone went on to serve in Military Intelligence Service. Nakasone was assigned as part of the U.S. Army military forces in the occupation of Japan and the 168th Language Detachment, 1st Cavalry Division where he assigned people to translation projects in the War Crimes Trials and HQ's daily translations. Discharged in 1948, Nakasone went on to teach history at White Bear Lake High School, MN, and Century College, White Bear Lake, MN until his retirement in 2000. Nakasone remained active in the Army Reserves and retired as a Colonel in April 1987 after nearly 42 years of service.

"The contributions of the Nisei Soldiers during WWII amplified the value and strength that inclusion and diversity, coupled with a strong sense of service can bring to our Nation," Gen. Nakasone said. "They paved the way for future generations of Japanese Americans, myself included."

Erika Moritsugu, deputy assistant to 47th President of the United States, President Joseph Biden, shared her personal connection having two uncles who served during WWII and received Medals of Honor.

"The new exhibit at the National Museum of the U.S. Army and the longstanding work of the National Veterans Network underscore how critical it is to honor and remember the Nisei Soldiers during World War II for their distinguished service fighting for our country," said Erika Moritsugu, deputy assistant to 47th President of the United States, President Joseph Biden. "We will never forget their allegiance and their gallantry. It is part of our legacy and inspiration and a critical part of our American history."

Just the day prior, the Army Chief of Staff, General James C. McConville joined a social reception at the National Museum of the U.S. Army to meet with the two WWII Veterans and Medal of Honor families.

Gen. James McConville, 40th Chief of Staff of the Army visited with the veterans and families and told them, "Our Soldiers today stand on your shoulders and strive every day to live up to the legacy you left us."