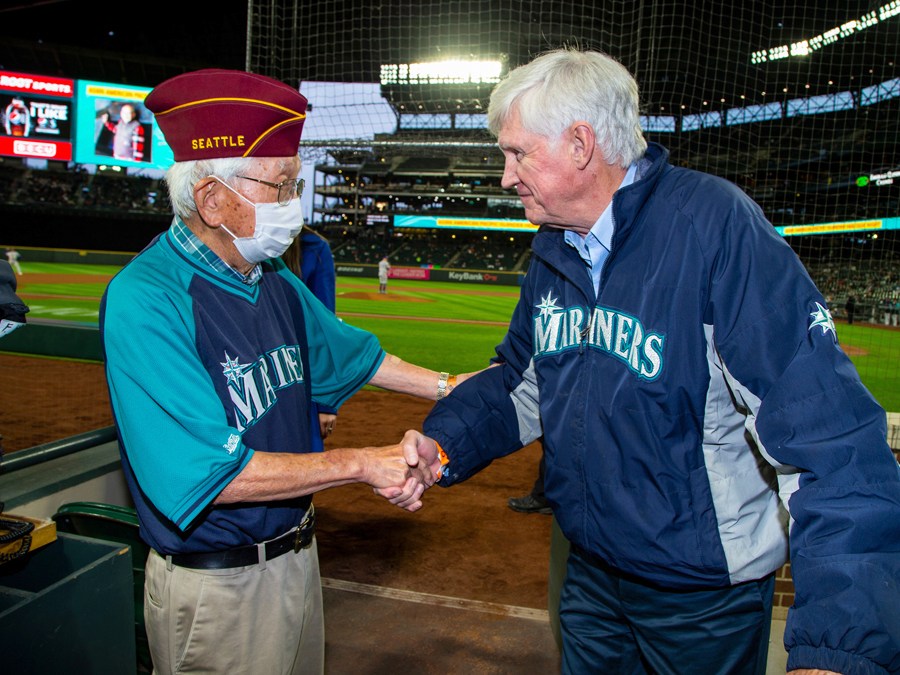 In a time of increasing anti-Asian hate crimes, the Seattle Mariners’ Asian American Pacific Islander Heritage Night, May 27th at T-Mobile Park took on extra meaning this year. And so, it was right and just that NVC veteran Frank Hori was honored on the field for his invaluable contributions as an Army solider during World War Two. The P.A. announcer exclaimed in his deeply resonating and celebratory voice:

“During the Second World War, more than 30,000 Japanese American soldiers bravely served our country on the frontlines. Tonight, more than seven decades following his service in the United States Army, we are proud to honor a Japanese American Nisei Veteran from the 100th Battalion, 442nd Regional Combat Team that served our country in World War Two. Please join us in welcoming Corporal Frank Hori.” Thank you for your service to our country. You are truly what makes the United States the greatest place to live.”

Honoree Frank Hori stood on the field wearing his NVC hat and waved energetically to the applauding crowd. Don Wakamatsu (#22), bench coach for the visiting Texas Rangers, stood nearby in the visitors dugout, heartily joining in on the laudatory applause. Wak, as he is affectionately known, has the honor of being the first ever Japanese American MLB manager. (Mariners 2009-2010) 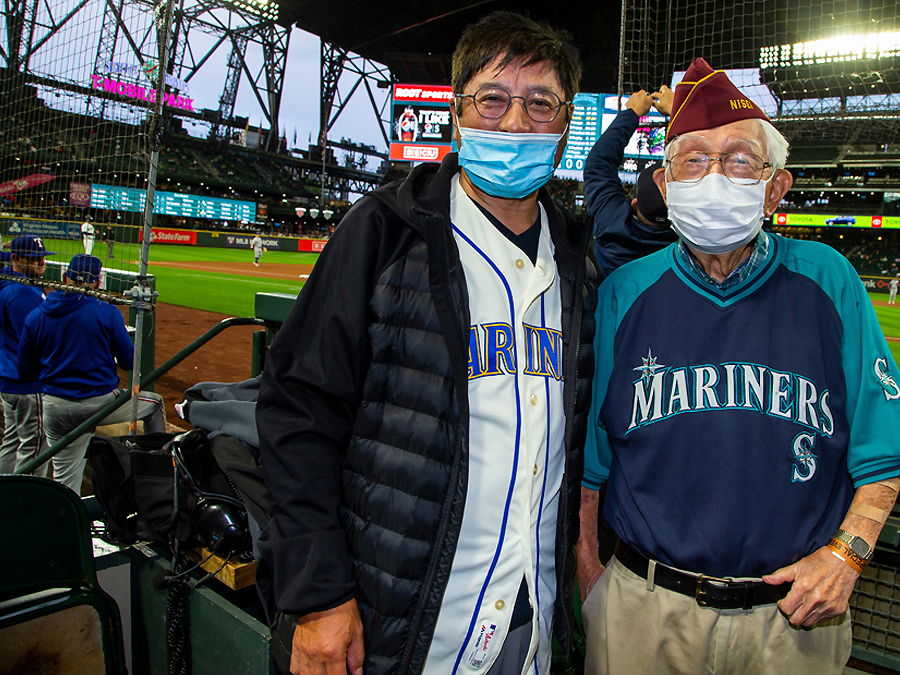 Later on, in the upstairs guest suite, Frank (accompanied by his son, Bruce; Dale and Shizue Kaku; and Shawn Brinsfield) met up with 104-year-old Army veteran Gene Moy, the oldest living Chinese American veteran in the United States. Mr. Moy had served in the army as a cook on the ‘Troop Train’ which transported G.I.’s to the East Coast en route to the European campaigns during World War Two.

Also, as part of the AAPI Heritage Night, 91-year-old Lillian Horita, was honored by having her throw the ceremonial first pitch. Lillian was accompanied by her daughter Mari Horita and Mari’s daughter, Naomi Fina. It was announced over the P.A. system that:

“At the age of 11, this Portland native (Lillian) and young Japanese American woman was taken from her home and placed in an enclosed encampment, where she would spend the next three years of her life. Despite the struggle, her hope and will never waned, eventually passing the same traits onto her daughter. Please welcome 91-year-old Lillian Horita!”

Lillian’s daughter, Mari Horita, is one of the founders of the Our Stories are Your Stories video storytelling campaign to raise awareness and lift AAPI voices. Mariners Care, the team’s nonprofit foundation, donated $2,000 to support the campaign. One of the featured stories of Our Stories are Your Stories has Seattle Seahawk legend, Doug Baldwin, giving a sincere heartfelt talk about his own Asian roots. His grandmother is of Filipina descent and has greatly influenced him in many ways. Doug remembers standing up for his grandmother when some would make fun of her accent.

Other AAPI notables who were honored were: Nathan Chan, Seattle Symphony cellist, playing the game-opening National Anthem; Dr. Helen Chu, a frontline COVID-19 researcher who is credited with first identifying the presence of COVID-19 in Washington state; and Kahealani Sharpe, who is a multi- talented sport athlete in wrestling, rowing and softball, an advocate for the homeless and against bullying, and a volunteer with Challenger Little League, an adapted Little League for differently-abled folks ages 5-22.

And by the way -- the Mariners shut down the Texas Rangers 5-0, hitting two home runs. Mariners’ pitcher Chris Flexen, newly signed after his stint in South Korean baseball, got the win.