The year 2020 marked the 75th anniversary of the atomic bombing of Hiroshima and Nagasaki, the end of WWII and the closure of the concentration camps where West Coast Japanese Americans were exiled and imprisoned. Only about one third of the Vashon residents who were forcibly removed on May 16, 1942, returned to Vashon. 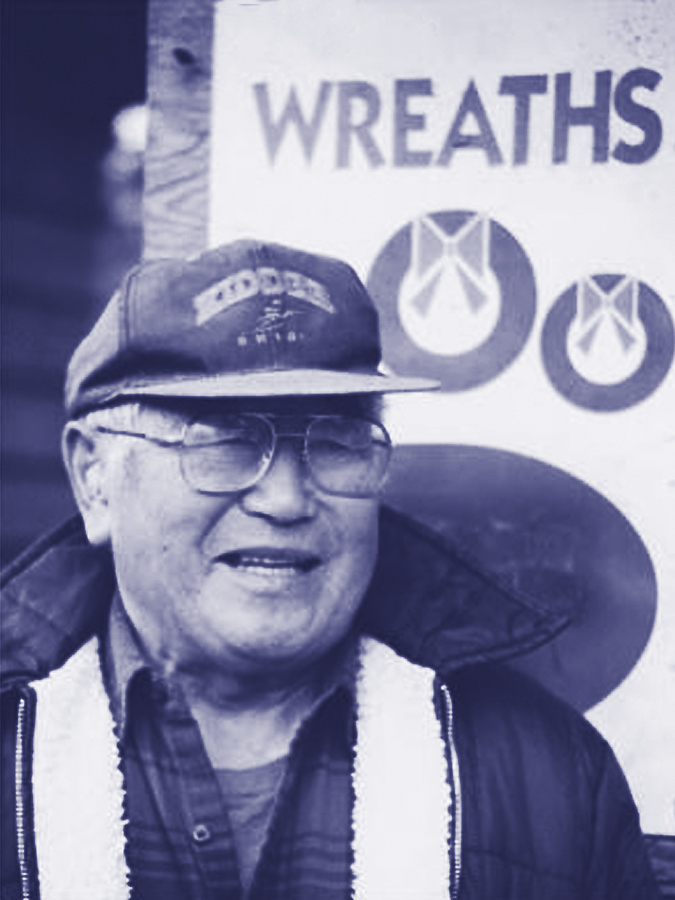 On New Year’s Eve, December 31, 1945, Augie Takatsuka returned to Vashon, catching the last ferry to Tahlequah, and then hitching a ride home with the only car on the ferry. For the next three months he lived with his parents and sisters, “doing nothing,” He would often wake his parents and sisters with his “horrible nightmares.”

Encouraged by a friend, Augie finally leased land across from where McMurray Middle School is today and returned to farming. He was able to purchase his farm on Bank Road when Rose Gorsuch offered to sell him twenty-seven acres at $50 down and $50 a year.  Augie said Rose Gorsuch was “our protector, ahead of her time …”

Asked why he returned to Vashon, Augie commented, “I couldn’t find any place that was as good as here …”

Augie was one of the last of the Vashon Island Japanese Americans to return from the exile and imprisonment of Island Japanese Americans during World War II. After enlisting in the 442nd Regimental Combat Team from the prison camp at Tule Lake, Augie was sent to Camp Shelby, Mississippi for basic training. In late 1943 he was sent to Italy and fought through the Gothic Line north of Florence. From there, the 442nd was sent to The Champagne Campaign, which invaded southern France.

Hospitalized three different times for trench foot, Augie was finally relieved of combat service and served the remainder of the War in France as part of the Quartermaster Corps stabling horses and mules for the Army.

Before WWII, there were 132 Japanese Americans living in 31 households on Vashon Island. Some 17 of those individuals left before evacuation for college, the military, or jobs off island. The 4 members of the Mukai Family pre-empted the evacuation by self-exiling outside the Exclusion Zone just before Executive Order 9066 took effect. On May 16, 1942, the remaining 111 Japanese Americans were gathered at Ober Park, shipped to Seattle, and forced onto railcars with blackened windows for days.  Destination and fate unknown.

All of the exiled Vashon Japanese Americans were initially sent to the euphemistically named “Pinedale Processing Center”, in the California desert.  Pinedale was really a temporary prison until the permanent concentration camps could be built. After three months at Pinedale, the Vashon residents were all moved to Tule Lake Relocation Camp, another euphemism for a concentration camp. When Tule Lake was transformed in February 1943 into an Isolation Camp for individual prisoners deemed to be disloyal, most of the islanders were distributed among six other prison camps throughout the nation: to Gila River, Arizona; Heart Mountain, Wyoming; Jerome, Arkansas; Minidoka, Idaho; Rohwer, Arkansas; and Topaz, Utah.

This forced diaspora effectively shattered the cohesion of the Vashon Japanese American community. Some Island families were moved to as many as five different camps during the next three years.

World War II came to an end on September 2, 1945. The concentration camps began to close in October and November and the prisoners were released to return home or to settle in other locations where they had job opportunities or family. Tule Lake did not close until May 1946 but the Vashon prisoners who had remained at Tule Lake were released in the Fall of 1945.

We should all take a moment to pause and reflect on the events of three quarters of a century ago and pledge “NEVER AGAIN.”

On May 16 at 1:00 pm, Mukai Farm & Garden will be holding a Day of Exile event on Vashon as a commemoration of the individuals who were expelled from Vashon on that day in 1942.