“Always be proud of your heritage.”

The U.S. Postal Service has announced that the official release date of the Go For Broke Japanese American Soldiers of World War II Forever Stamp is Thursday, June 3rd, 2021. The first city of issue for the stamp will be Los Angeles, California, where Ms. Takahashi and her friends started the stamp campaign in 2005. 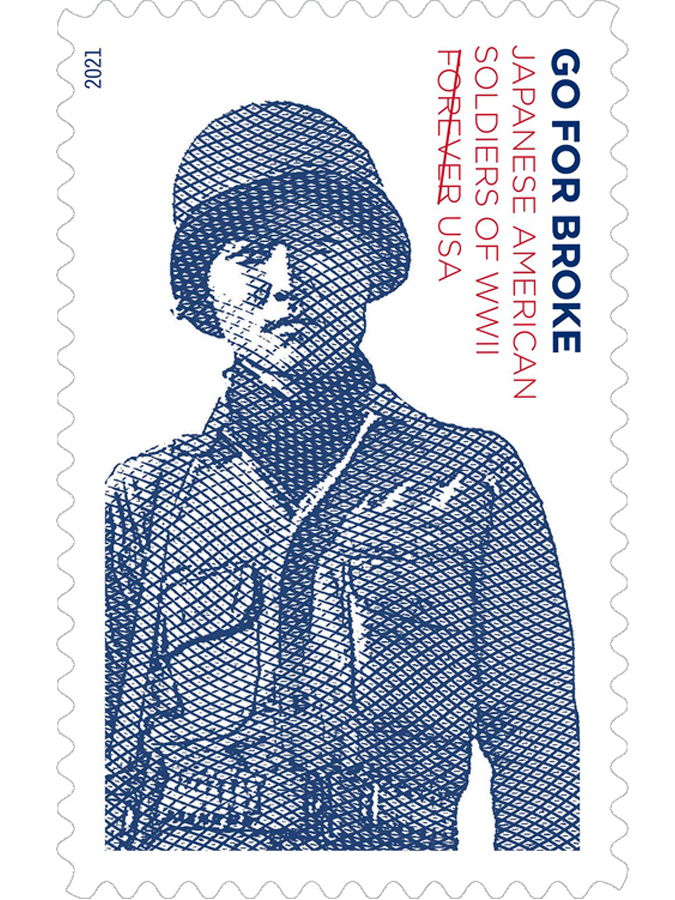 The little stamp with a big story cannot come soon enough for its supporters, especially in light of the rise in anti-Asian American violence and hate crimes.

The USPS is currently working with the Stamp Our Story Campaign and community partners that rallied for the stamp such as the Japanese American Veterans Association (JAVA), Go For Broke National Education Center (GFBNEC), Japanese American Citizens League (JACL), National Japanese American Memorial Foundation (NJAMF), Nisei Veterans Legacy, and Friends of Minidoka, among many others. The goal is to collaborate and assist the USPS in a community-based national rollout for the stamp.

A USPS national video dedication is being made, and special regional stamp dedications are being developed across the nation to commemorate the inspiring American legacy of the Go For Broke Soldiers.

Stamp Our Story is the coalition of family and friends of the Nisei soldiers that backed the proposal for the Go For Broke Soldiers Stamp and includes the many organizations that have supported the cause. Nisei is the term for American citizens whose parents immigrated from Japan. The effort was started in 2005 by three California Nisei women who each endured incarceration in US detention camps during the war: Fusa Takahashi (93) of Granite Bay, Aiko O. King (93) of Camarillo, and the late Chiz Ohira of Gardena.

“In the past, our founders have each expressed their wish that the stamp bring people and organizations together to remember and to honor what the Go For Broke Soldiers accomplished, and to be reminded of their American legacy that impacts us all today,” said Stamp Our Story Co-Chair Wayne Osako, who has been helping the campaign founders since 2006, and has a number of Nisei relatives who served in the 100th/ 442nd RCT, MIS, and WAC.

Some dedications are planned to be virtual, and some in-person, though limited due to the ongoing pandemic. Outreach to communities is currently being conducted to see if there is interest in developing local events. Ceremony planning is already underway in Hawaii, California, Oregon, Idaho, and Texas. Those interested are encouraged to reach out to their local affiliated veterans organizations that may already be in contact with Stamp Our Story. If not, they can get more information at www.StampOurStory.org.

Ms. Takahashi, campaign founder, shared the following statement to supporters: “We thank all of you who have supported the stamp campaign over the past 15 years. It took the support from many, many organizations and individuals to make this stamp become a reality. We invite you to celebrate the stamp with us when it comes out. And remember to always be proud of your heritage. As Nisei, it’s what our parents taught us that made these soldiers give their best. Thank you!”