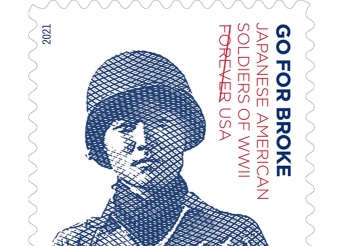 The U.S. Postal Service has announced that the official release date of the Go For Broke Japanese American Soldiers of World War II Forever Stamp is Thursday, June 3rd, 2021. The first city of issue for the stamp will be Los Angeles, California, where Ms. Takahashi and her friends started the stamp campaign in 2005.

2021-2O22 NVC Foundation Officers and Board of Directors

"The Minidoka Story" by Sat Ichikawa

Order a Brick on the Memorial Wall

Since 2008, the NVC Foundation has sold over 3,700 memorial bricks in honor of Japanese American veterans and people removed and incarcerated in one of the ten WRA camps during WWII.

NVCF Shiro Kashino Memorial Scholarship recipient Evan Kato is the son of Madeline and Gary Kato.  He attends Seattle Lutheran High School and has a 3.8 g.p.a.  He hopes to attend Gonzaga University and study Biology. Here is his essay on the Nisei Veterans' legacy.

NVCF Shiro Kashino Memorial Scholarship recipient Kaci Yoshimura is the daughter of Teri and Ross Yoshimura and the great niece to Joe, Carl and Ray Tsuchiya.  She is a student at Point Loma Nazarene University and maintains a 3.941 g.p.a. She is majoring in Psychology and Speech and Language Pathology. Here is her essay on the Nisei Veterans' legacy.

NVCF Shiro Kashino Memorial Scholarship recipient Emily Uyeji is the daughter of Stacy and Eric Uyeji and the granddaughter of Susan Uyeji.  She works part time at Seattle Fish Guys while attending Franklin High School with a 3.93 g.p.a.  She hopes to attend the University of Southern California. Here is her essay on the Nisei Veterans' legacy.

The year 2020 marked the 75th anniversary of the atomic bombing of Hiroshima and Nagasaki, the end of WWII and the closure of the concentration camps where West Coast Japanese Americans were exiled and imprisoned. Only about one third of the Vashon residents who were forcibly removed on May 16, 1942, returned to Vashon...

On May 16, 1942, armed guards herded 111 Vashon residents onto trucks at Ober Park to be sent to detention camps in Pinedale, California.  Their crime was to be of Japanese descent during WWII. This May 16, 2021, Friends of Mukai will commemorate the Day of Exile at 1:00 pm with an event at Mukai Farm & Garden.

...The Nisei soldiers who served in World War II fought on the battlefields in Europe and in the Pacific. They fought against America’s enemies but also were fighting the war against prejudice at home...

Go For Broke National Education Center (GFBNEC) supports the legacy of Japanese American WWII veterans who served their country at a time when the United States denied their civil rights. Join us in advocating for civil liberties and equality, the cornerstone of our American democracy, by entering our 2021 student contest.