On July 15, 2020, at 12 noon, JAVA will commemorate the triumphant return of the 100th Infantry Battalion/442nd Regimental Combat Team from the bloody battlefields in Europe to Washington, DC. Seventy- four years earlier, on July 15, 1946, President Harry Truman received the military unit at 12 noon at the Ellipse, which is the outer south lawn of the White House, following its march down Constitution Avenue on a rainy day. The President presented the 100th Infantry Battalion/442nd Regimental Combat Team with its seventh (7th) Presidential Unit Citation earned since its activation in 1943. This military unit except for its initial officers was a segregated all Japanese American combat unit. 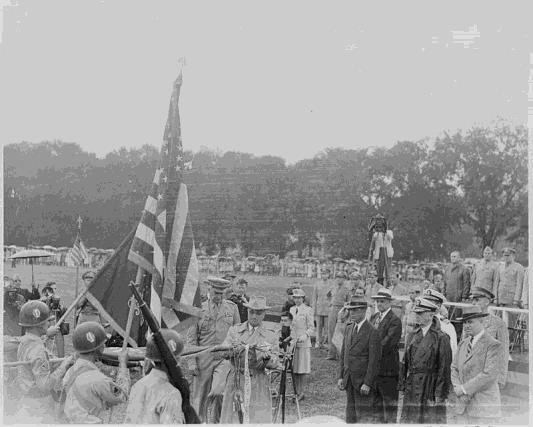 During the ceremony, President Truman said:

“You fought not only the enemy abroad, but you fought prejudice at home – and you have won. Keep up that fight, and we will continue to win – to make this great Republic stand for just what the Constitution says it stands for: the welfare of all the people all the time.”

In 1943, Japanese Americans were asked by the federal government to declare whether or not they were loyal to America. Those who answered yes showed that they were willing to fulfill their civic responsibilities as American citizens by serving in the US military and, more importantly, that they still believed in the American dream that brought their Issei parents to this country. They made this decision under the most adverse circumstances.

Most were being unjustly imprisoned in War Relocation Authority confinement camps, and all faced widespread overt political and racial “prejudice at home” against persons of Japanese ancestry that predated the war against Japan. For those who served in Europe, this decision tested their courage on the battlefields. They responded with the valor that is still unmatched in terms of their military accomplishments. Those who served in the Pacific significantly contributed to shortening the war against Japan and saved countless American lives.

At 12 noon (East Coast time) on July 15, 2020, JAVA plans to lay a wreath at the Price of Freedom Wall, National World War II Memorial, to show our appreciation for the legacy created by the Nisei soldiers who served in World War II. The Memorial is close to the Ellipse along Constitution Avenue in Washington, DC.

JAVA asks that you show your support for the inaugural Day of Affirmation by observing a minute of silence on July 15, 2020, at 12 noon East Coast Time / 9:00 AM Pacific Time and by ending this minute of silence with the heartfelt thought “To all who served, thank you for your service.”