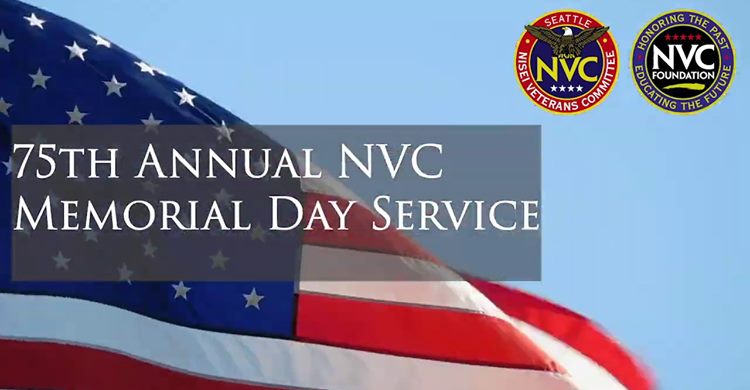 This year marks the 75th Annual NVC Memorial Day Service, but due to the Coronavirus pandemic, our plans will change. NVC Commander Walter Tanimoto and NVC Foundation President David Fukuhara, in consultation with Lake View Cemetery Director George Nemeth, have decided to utilize digital technology to conduct a Virtual Memorial Day Service on Monday, May 25, 2020.

Instead of the usual gathering at Lake View Cemetery, we will develop an online video tribute featuring all the key elements of the traditional Memorial Day Service.* Our Virtual Memorial Day Service will be uploaded to our YouTube Channel with links to several social media sites -- Facebook, Twitter, Instagram – thus allowing veterans, their families, members of our community, and many NVC friends to view our tribute. To view the video, click on this link: https://www.youtube.com/watch?v=vtTdMY1ZEyk&t=306s

Instead of the traditional prayer in front of the Nisei War Memorial Monument, our Christian and Buddhist leaders will tape their prayers. In lieu of a wreath laying ceremony, our community leaders will provide brief written statements which will be incorporated into the video.

Photos taken from recent NVC Memorial Day Services will add to the tribute along with a recital of the Pledge of Allegiance, the National Anthem, Taps, and appropriate music for the day.

*We are extremely grateful to Mercer Island High School Junior Lea Hidaka for offering her time and skills to produce the video to honor the fallen soldiers from our community.

The NVC Memorial Day Service is one of the longest standing memorial services in the Puget Sound Region. Each year since 1946, it has been held to honor those Japanese Americans who died in action while serving the United States of America. Many of those who served in the famed 100th Battalion/442nd Regimental Combat Team and the Military Intelligence Service (MIS) during WW II did so while their families were incarcerated behind barbed wire in mass detention camps at home.