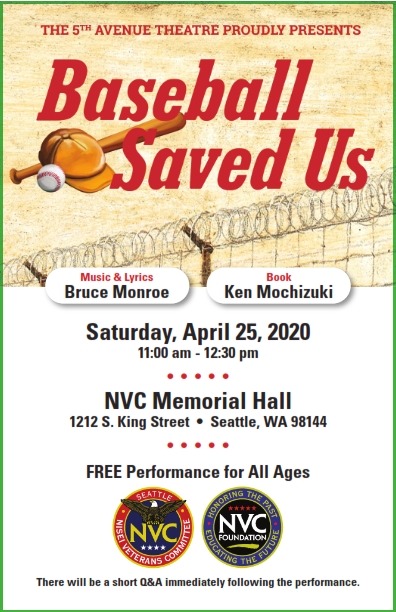 Since 1994, the Adventure Musical Theatre Touring Company has brought the wonder and joy of live musical theater to students throughout Washington state. Adventure Musical Theatre musicals engage students through storytelling, song, and dance. Our productions are created by local composers and writers and are designed to incorporate standards-based educational content.

ON TOUR SPRING 2020: Baseball Saved Us

In 1942, just two months after the attack on Pearl Harbor, President Roosevelt signed into law Executive Order 9066, authorizing the forced relocation of almost 120,000 Japanese Americans from the West Coast—including Washington State—to incarceration camps in desolate or remote areas. Taking only what they could carry, they were forced to leave their homes and communities, imprisoned behind barbed wire, and guarded by soldiers. Most were American citizens, and many were children.

Based on the award-winning children’s book by Seattle author Ken Mochizuki, Baseball Saved Us follows the journey of young Shiro who, along with his family, is imprisoned in an incarceration camp. As Shiro struggles to learn how to play baseball on the hot dusty fields, he learns more than just the game—he learns how to survive.

This is a free performance suitable for both children and adults. Please join us for the performance of Baseball Saved Us!  There will be a short Q & A immediately following. The performance is open to the public.