Washington, DC.  The Merrill Marauders Veterans organization announced that the Bill to award the Congressional Gold Medal to the 5307th Composite Unit (Provisional), commonly known as Merrill’s Marauders (MM), was passed by the U.S. House of Representatives on September 22, 2020. It passed the U.S. Senate on December 9, 2019 and now awaits the President’s signature. The nickname Merrill’s Marauders was given by an American journalist after its Commander, BG Frank D. Merrill, USA. Eight living MMs and family members of the deceased are expected to participate in the award ceremony, when it is held. 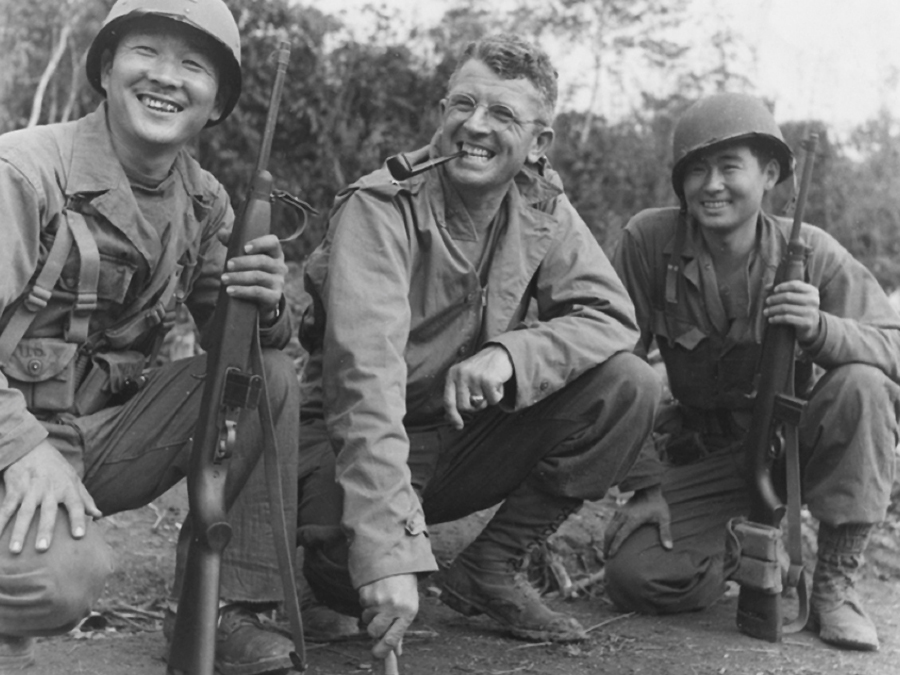 British Prime Minister Winston Churchill and President Franklin D. Roosevelt agreed at the 1943 Quebec Conference to launch a secret, “long-range penetration force” of American volunteers, code-named Galahad, to fight behind enemy lines in Myanmar (Burma). The goal of the mission was to capture the town of Myitkina, which was Japan’s principal supply base in Burma, had an all-weather airport from which Japan interdicted American flights over the hump, and provided access to “Burma Road” needed to transport war material to China. Operating behind enemy lines to reach their objective, MM’s secondary mission was to disrupt enemy activities.

General George C. Marshall, Army chief of staff, who said this was a mission against “large numbers of the enemy with few resources that were unmatched in any theater” issued a call for volunteers. Recruiters told each volunteer “85% of you will not be standing when the campaign is over, do you still want to volunteer.” "Yes!" was the unanimous response. MM total strength was 2,997 officers and enlisted men. This would be the first time since the Boxer Rebellion of 1899 that American combat troops would serve on the Asian continent.

Two hundred Nisei linguists volunteered from which 14 enlisted men were selected, evenly split between Hawaii and mainland Nisei. They were:

1st Lt William Laffin, who was born of Japanese mother, raised in Japan and who graduated from the MIS Language School, was the leader of the Nisei contingent. The Nisei served in three battalions, First, Second and Third. In February 1944 the MM began its 1,000 mile, five-month trek, with no artillery support and with all supplies and equipment carried on their backs and pack mules. They encountered mountains, valleys, rivers, and jungle infested with malaria-carrying mosquitoes, leeches, snakes and with diseases such as dengue, typhus, and dysentery. Also, due to inadequate resupply by air drops, the MM suffered from hunger and thirst.

The MM fought the Japanese 18th Army Division in 5 major and 30 minor engagements. In some of their engagements, the MM received flank support from CIA-trained Kachin rangers who knew their native terrain well.

Thirteen hundred MM arrived in the Myitkina area after their 100-mile hike from Nphum Ga and waited for the monsoon rain to end. On May 17, 1944, supported by two Chinese regiments, MM attacked Myitkina airfield that resulted in its and the town’s capitulation on August 10, 1944. With only 200 Marauders left standing, as correctly predicted by Army recruiters, the MM disbanded. The newly arrived American MARS Task Force served in the clean-up operation of the Myitkina-Lashio area which paved the way for the opening of the Burma Road.

In addition to their intelligence duties, Nisei did everything the infantryman was expected to do.  While all Nisei survived the mission, none is living today. The team leader, CAPT Laffin was killed in combat. Each MISer received the Combat Infantryman’s Badge and a Bronze Star. In addition, one received the Legion of Merit, 14 received a second Bronze Star, and 7 received 2nd lieutenant commissions. BG Merrill said of the Nisei “I could not have gotten along without them”.

Japanese soldiers spoke freely and loudly in the jungle. Nisei translated and passed to their commanders tactical intelligence information. Vegetation grew so thickly at some locations that Nisei could get up close to the enemy without being noticed. At Nhpum Ga, Roy Matsumoto crawled to the enemy bivouac area, eaves dropped on their conversation, and reported to his commander Japanese plans to mount a large attack the next morning. The commander spent the night preparing countermeasures. When the Japanese attacked, the first two waves were annihilated, and the third wave withdrew. Without the Nisei intelligence report the result might have been different. Matsumoto also climbed a tree, tapped the enemy’s telephone line and produced intelligence that caused U.S. bombers to destroy the enemy’s ammo dump.

When the MM disbanded, Matsumoto was assigned to CIA for its clandestine operations in Indo China. Another Nisei was assigned to the CIA detachment in Burma to work with the Kachin Rangers, a few remained in Burma to serve with the British Army; a few were sent to stateside hospitals, and others were assigned to Southeast Asia Translation and Interrogation Center (SEATIC) in New Delhi, India,  and to SINO Translation and Interrogation Center (SINTIC) in China.

When the Office of Strategic Services (OSS) was awarded the CGM in 2018 three Nisei MM were entitled to receive the award:  Edward Mitsukado, Robert Honda, and Roy Matsumoto.   When the 100th Battalion, 442 RCT and MIS received the CGM in 2020 these three, received their second CGM.  When the MM receive the CGM, families of these three Nisei will be entitled to receive their third CGM, a remarkable feat.  Mitsukado and Honda, both former 100th Battalion members, were transferred to the MIS due to their Japanese language fluency.   Matsumoto graduated from middle school in Japan.  When the MM disbanded on August 10, 1944, Mitsukado and Honda volunteered to serve in OSS Detachment 101 in Burma.  Honda worked with the Kachin Rangers in north Burma.  Matsumoto eventually received a transfer to OSS Detachment 202 and engaged in special operations in Indochina such as dynamiting bridges.   JAVA congratulates the 3 families for this unique achievement.