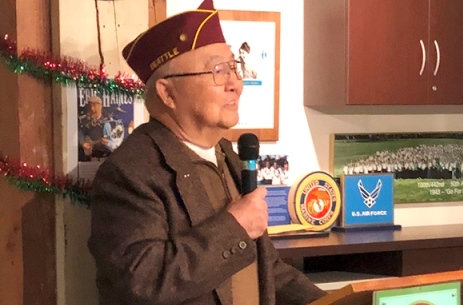 "The Go For Broke Spirit" - Book Release and Program

The NVC/NVC Foundation is welcoming Shane Sato back to Seattle. Shane will be presenting copies of his book to the Seattle Nisei Veterans who are featured in this book. They are Shig Otani, Fred Shiosaki, Mickey Hiroo, Roy Kirita, George Kozu, Shig Tanagi, and the late Jimmy Kanaya. Over 20 years in the making, photographer Shane Sato has been shooting moving portraits of Japanese American Nisei soldiers to create a one of a kind coffee table book.

The Children’s Christmas party a 72-year old tradition continues to be a special time for children and families in our community. Memories of attending this Christmas party are a common thread that links all the generations in the Japanese American community.

Our neighbors up the street from the NVC Hall came to visit on December 19, 2019. Summit Sierra is a small college-prep public high school which provides a supportive learning environment for a diverse group of passionate young people...

Author Jamie Ford, who wrote the book Hotel on the Corner of Bitter and Sweet, visited the NVC Memorial Hall during the January 3rd Nisei Luncheon.  He was joined by a young screenwriter, Chloe Hung, who is tasked with writing a script to translate the book to the silver screen.

During a very busy time of the year, NVC member Dr. Brian Yamamoto presented a 60-minute video of his 75th Anniversary 100th/442nd France Tour on Saturday, December 14th in the NVC gym. The video was produced by Mike Isumi, detailing their July 5-16, 2019 tour.

Our Lost Years, a professional feature-length educational documentary film, commemorates the 75th anniversary of Executive Order 9066. Come to a free film showing during the monthly NVC Memorial Hall Open House on Saturday, February 29th from 2:00 pm - 4:00 pm. There will be a Q&A and reception with filmmaker Lane Nishikawa.