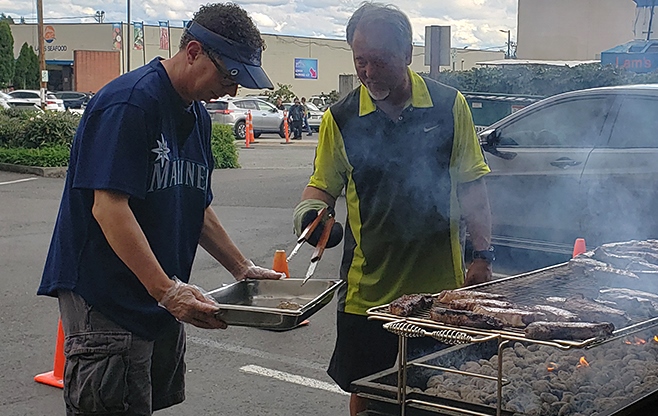 After skipping a year, the annual Summer Cookout was held on Saturday, August 24, at NVC Hall. We had over a hundred guests in attendance who were served a delicious steak or salmon dinner, rice, tsukemono, and cake. Drinks were served by bartenders Warren Higa, Robert Higa, and Walt Tanimoto.  Dinner was followed with the customary game of bingo!

SAVE-THE-DATE: A Tribute to Norm Mineta

The Annual NVC Golf Tournament took place on August 19th at Foster Golf Links with 72 players having a friendly competition between three flights of golfers, Flight 1 Men’s (Handicap less than 19), Flight 2 Men’s (Handicap 19 and above) and Women’s Flight. Great weather, and arguably, great golf was experienced by all.

Issei & Nisei Monument: "Okagesamade -- I am what I am because of you"

Last March, former NVC Commander Keith Yamaguchi and longtime Nisei Luncheon volunteer Sue Beeson broached the idea of some kind of monument or memorial to the Issei and Nisei -- "Our Greatest Generations." Forming a committee to fulfill that vision, the group visited rock quarries to find the appropriate stone for the monument envisioned to stand near the Memorial Wall...

On Sunday, September 8th, the story of the NVC veterans’ legacy and the Japanese American Experience was shared with all who attended the NVC luncheon with 7th Infantry Division soldiers stationed at JBLM and visiting Japanese Ground Self Defense Force soldiers. This 7th annual luncheon honored active military soldiers at the JBLM military base and Japanese soldiers participating in the Yakima Range Live Fire Drills.

From October 15th – December 7th all Medicare members have the opportunity to make changes to their Medicare Advantage and Prescription Drug Plans for the upcoming 2020 year. This is an important opportunity as 2020 will be a big year for Prescription Drugs and Medicare Supplement Insurance changes.

Louise Kashino Takisaki -- a leader in her community, and a beloved mother, grandmother, and great-grandmother died surrounded by family on August 20 after a sudden illness. At 93, Louise still lived a full and independent life. She remained active in the NVC Foundation, educating younger generations about the Japanese American incarceration so that such an atrocity would never happen again.

The International District Emergency Center will sponsor FREE First Aid / CPR / AED classes in the months of October and November 2019 at the Nisei Veteran's Memorial Hall. The classes will begin at 9:00 AM and end around 5:00 PM.  There is a thirty-minute lunch break (sack lunch is recommended). Read more...