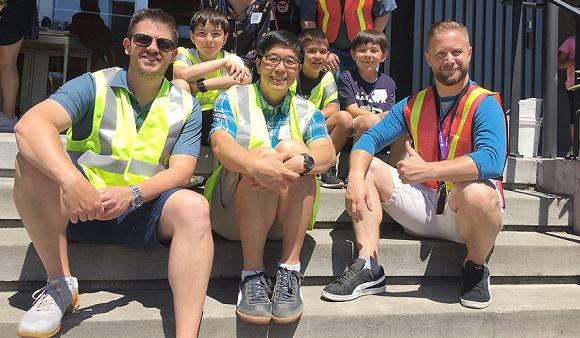 Our annual NVC Chow Mein fundraiser was held on Sunday, June 30th, and we had another successful day thanks to our supporters who purchased dinner and raffle tickets.   We also thank the many generous donations made to NVC during the event. It was nice to see diners in the gym on the newly renovated floor enjoying the company of their family and friends.

SPEAKER SERIES AD: Never Give Up!

NVC Donations - In Appreciation of the Chow Mein Dinner

Thank you to all bakers and volunteers for enabling us to raise a record breaking $4,500, proceeds to go to the NVC Foundation Scholarship funds. Although we did not make apple pies in bulk this year, our bakers rose to the occasion to make this year’s fundraiser so successful!

In Washington State, JGSDF have an annual Rising Thunder exercise which is held at the Yakima Firing Range. This year, the Liaison Officer LTC Fumio Takagi is being reassigned to Japan after 3 years of a successful tour of duty at JBLM.

On July 16, 2019, the Ministry of Foreign Affairs of Japan announced the recipients of the Foreign Minister’s Commendation for 2019. In our jurisdiction area, Budokan Dojo, Seattle Dojo, Japanese Community Service of Seattle, and Nisei Veterans Committee were selected for this honor.

The US Army 7th Infantry Division and the Japan Ground Self Defense Force contingent will be joining us for an annual Luncheon on Sunday, September 8, starting at 10:30 AM in the NVC Memorial Hall. Veteran NVC members are encouraged to attend and to share their experiences.

For the April Speaker Series, guest speaker Stan Shikuma spoke about his personal history relating to Tule Lake, the importance of it, the origins and development of the Tule Lake Pilgrimage.

The NFL’s Seattle Seahawks invited fans to partner with them choosing a cause to donate 100 minutes of time, and help shape the community for the next 100 years. The NVC was one of only three non-profit organizations selected by the Seahawks for this event.

NVC Foundation Speaker Series Special Event - Never Give Up! Minoru Yasui and the Fight for Justice will be presented on Saturday, September 28th from 2:00 pm to 4:00 pm at the NVC Memorial Hall.  Never Give Up! is a documentary film by Holly Yasui and narrated by George Takei.