Speech by COL Horikawa at the 2019 NVC/NVCF Installation Luncheon 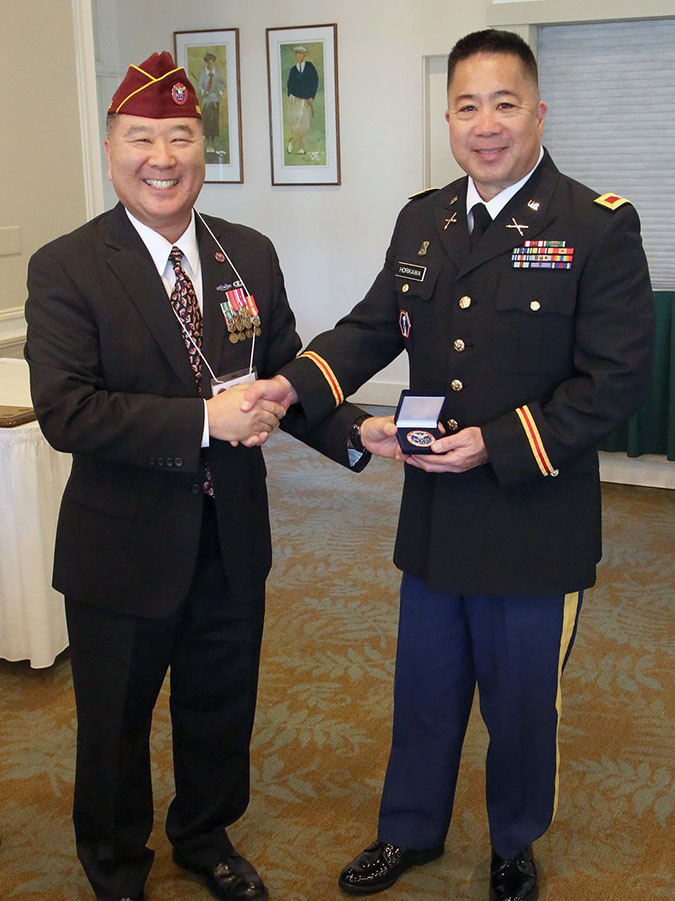 Thank you very much for inviting me here today and congratulations in advance to the newly appointed officers of the Nisei Veterans Committee as well as the scholarship recipients.  I want to especially thank Walt Tanimoto, Mike Yaguchi, and everyone from the NVC for bringing me out here to your wonderful city.

This is an incredible honor for me to not just attend this luncheon, but to stand here in front of you as a speaker.  I am just an average Soldier who served like many others and did my small part in the National Guard and Reserve.  So, to be here in front of you, especially among the Nisei heroes I admire so much and the many other distinguished veterans here today, is really an incredible and humbling honor.

If you don’t mind, I’ll quickly introduce myself and provide a little of my background.  My name is Keith Horikawa, and I’m a Sansei from Wahiawa, Hawaii.  My father Louis grew up in Honolulu and was a childhood friend of the late Senator Inouye.  My dad was also an MIS Soldier during the war.  After attending the MIS language school at Fort Snelling, Minnesota, and the Presidio of San Francisco, he served as a linguist in the 674th Field Artillery Battalion of the 11th Airborne Division and completed his service in Sendai, Japan, during the occupation.  One of my Uncles, George Sakihara, also served as a cook in M Company, 3d Battalion, 442d throughout the war.  Perhaps some of you crossed paths with my dad or Uncle George at some point.

Besides my dad and uncle, I also have my own connection to the Nisei military legacy.  Although I’m a Field Artillery officer, I was very fortunate to have served as the Executive Officer of the 100th Battalion, 442d Infantry in the Army Reserves from 2007 to 2011, and as Commander of the 100th for the following two years.

During that time, I completed my 2nd wartime deployment in support of Operation Iraqi Freedom when the 100th deployed with the 29th Infantry Brigade Combat Team from Hawaii.  I was also the battalion commander in 2011 when we provided Color Guard and logistical support to the Congressional Gold Medal ceremony in Washington, D.C.

My goal today is to provide some background of the current 100th Battalion, 442d Infantry, US Army Reserve, and to talk a little about the Soldiers who have served in the battalion over the years.

Mike Yaguchi also asked me to talk about how the current 100th – 442d Infantry accomplishes its missions in light of the battalion’s combat legacy during WWII.  But first I’d like to briefly talk about how the original 442d Regimental Combat Team—to include of course the 100th Battalion—deactivated after World War II and was brought back a few years later as a unit in the Army Reserve.

100th - 442d Infantry Deactivation and Reactivation in the US Army Reserve

As you know, World War II officially ended on September 2d, 1945 following Germany’s surrender in May of that year and Japan’s surrender on August 15th.

I’m proud to report that the 100th BN today is a strong, relevant organization in the modern Army.  The battalion has the latest in weapons, equipment, and technology; has served and fought overseas in the Global War on Terror; and continues to participate actively throughout the Pacific Theater in exercises in Malaysia, the Philippines, Korea, and New Caledonia to name a few.  Most notably, the current 100th BN is a manifestation of what the Nisei Soldier fought for in WWII—equality and fairness.

What was once a segregated unit made up of Japanese American Soldiers is now one of the most racially and culturally diverse organizations in the Army.  The BN is spread out across the Pacific with units in Hawaii, American Samoa, Guam and Saipan.  Throughout our ranks are Soldiers—men and women—of every imaginable racial and ethnic background who proudly live and Soldier by the words, “Go For Broke.”

I can personally attest to the fact that today’s Soldiers of the 100th know the battalion’s WWII history intimately; sing the 442d fight song powerfully; and participate in Nisei veterans events, clubhouse cleanups, and, sadly, Nisei veteran funerals on a routine basis.

I have served in various units in the National Guard and Army Reserve over the past 28 years and can honestly say that the 100th BN Soldiers are a special breed—they’re a more confident, competent, yet humble group than other units.  They have a certain can-do attitude that can only be described as the Go For Broke spirit.  To a Soldier all have a deep pride in the regiment’s continuing history from WWII and strive to maintain the legacy and honor of the 442d.

Finally, I’d like to recognize and humbly thank our Nisei predecessors—the original members of the 100th Battalion, 442d Infantry Regiment, Military Intelligence Service, and others who served in various capacities.   You are the heroes who did so much for not only Japanese Americans, but for the country and really the entire world during World War II. You gave the future generations the priceless gift of freedom and equality.

Because of you I am able to proudly serve on a level playing field in both my military and civilian careers.  Because of you, the 100th Battalion, 442d Infantry continues to thrive as the only remaining combat unit in the US Army Reserve.  On a personal note, thank you for everything you have done for my family and me.  I am a proud, productive American because of you.  Okage sama de [お蔭様で]. Go For Broke!