The Jun Fan Gung Fu Institute of Seattle held its first ever Instructors Conference at the NVC Memorial Hall on March 11, 12 and 14, 2019.  The event was held in conjunction with the 95th birthday of Mr. Taky Kimura, best friend and highest-ranking student of martial arts legend, Bruce Lee.  Top martial artists from all over the world came together as a family, in the spirit of unity, to celebrate the friendship of Taky Kimura and Bruce Lee.  The NVC Memorial Hall was absolutely the perfect location for the occasion. 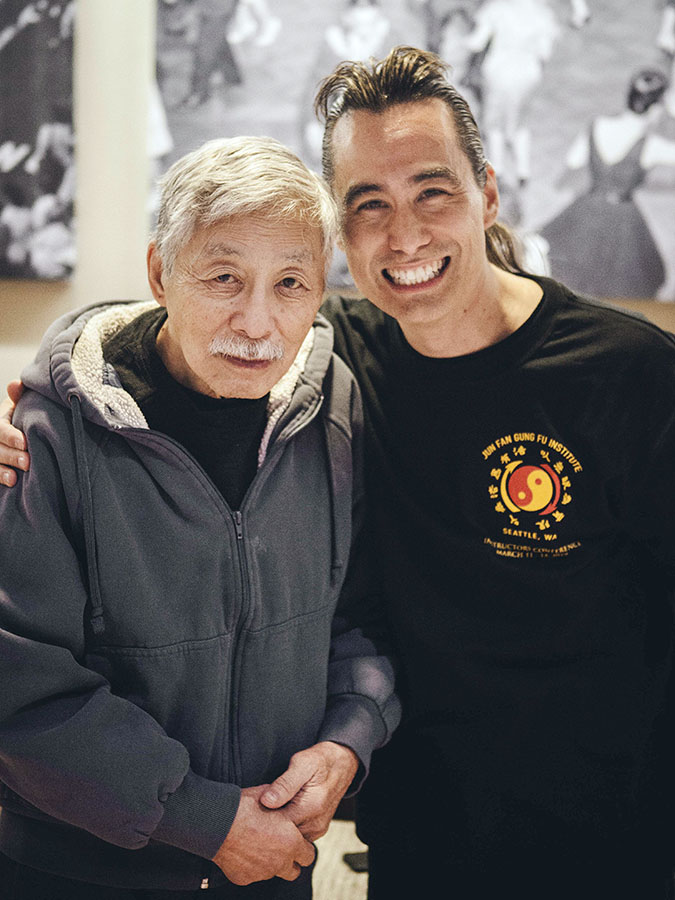 When I began planning the event, the first place that came to mind as the location to host the event was the NVC Memorial Hall.  As a fourth generation Japanese American from Seattle, the NVC Memorial Hall is a sacred space.  My Grandfather, Kei Fujikado, was in the Military Intelligence Service and my Uncle, Kenji Nakamura, was in the 442nd Regimental Combat Team.  Needless to say, the contributions of our Nisei Veterans are an extremely important piece of our family history.

Additionally, the building’s origins as a dojo for the Kendo Kai and its history of hosting martial arts clubs (including my wushu team in the early 80’s) added to the magic of the Memorial Hall.

I needed to figure out who to contact at the NVC.  As a previous staff member of Densho, I asked my former boss (more appropriately, my mentor), Tom Ikeda, if he had a recommendation.  He, as well as my friend Dana Hoshide, both mentioned Danielle Higa, daughter of Warren Higa, which eventually led me to Susan Uyeji.  Once I connected with Susan and confirmed with Commander Walt Tanimoto, the event was up and running and really taking shape.

Upon arrival the morning of March 11, I was overcome with emotion.  Living in Los Angeles, I hadn’t had the opportunity to visit the Hall in several years.  It is such a beautiful and meaningful venue for our community to remember, reflect, and honor our heroes. 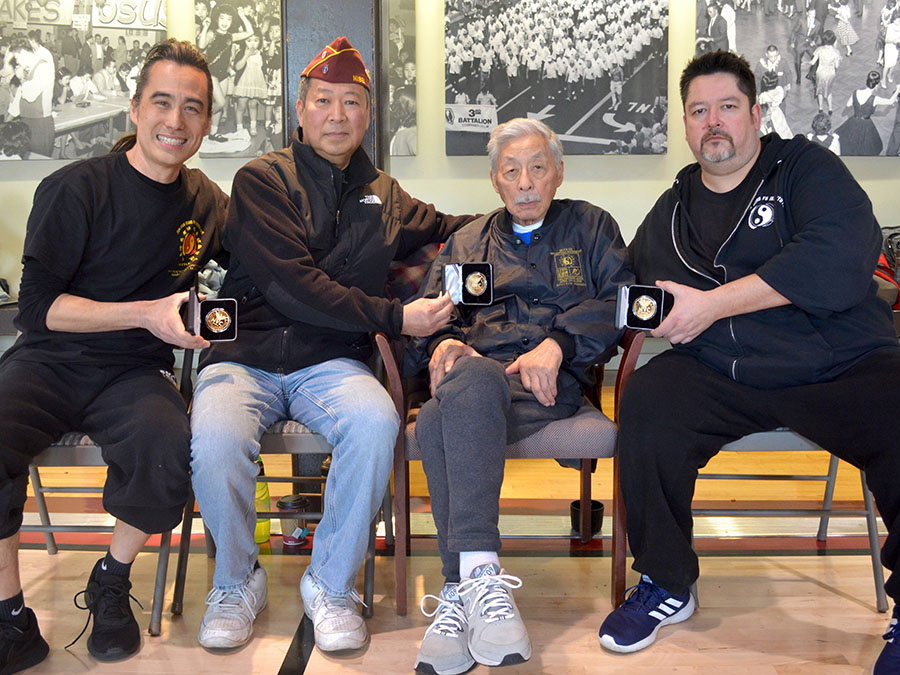 I was greeted at the Hall by former NVC Commander Dale Watanabe. As fate would have it, Mr. Watanabe is a martial artist himself who trained in Seattle under Mr. Kimura.  In the Los Angeles area, Mr. Watanabe trained under legendary instructors Sifu Richard Bustillo and Guro Dan Inosanto - two of Bruce Lee’s most important students and friends.  Many of our participants, including myself, are students of Mr. Bustillo (IMB Academy) and Mr. Inosanto (Inosanto Academy), and thus we share a common martial arts lineage.  Mr. Watanabe is also an outstanding photographer, for which we are very grateful.

When Mr. Kimura arrived, accompanied by his son, Sifu Andy Kimura, he immediately said, “Wow, this is a beautiful gymnasium!”  He asked why we were all gathered together.  I responded, “we’re all here to celebrate you, Sifu Taky!”  Ever the humble gentleman, he replied with a smile, “Me?  I’m not anyone special!”  The truth is, Sifu Taky Kimura is a very special, one-of-a-kind individual.

Taky Kimura was born in 1924 in Clallam Bay, WA.  Just before his high school graduation, he and his family were sent to the incarceration camps, first at Tule Lake and later at Minidoka.  Upon his return to Seattle, he experienced a period of low self-esteem and a lack of confidence.  It wasn’t until he met his soon-to-be best friend, Bruce Lee, and discovered Jun Fan Gung Fu, that his life took a turn in a positive direction.  Mr. Kimura was Bruce Lee’s first assistant instructor at the Jun Fan Gung Fu Institute of Seattle.  After Bruce Lee moved to California, he instructed his friend Taky to continue teaching, under the mantra “keep the number of students low, but the quality of instruction high.”  Mr. Kimura took his 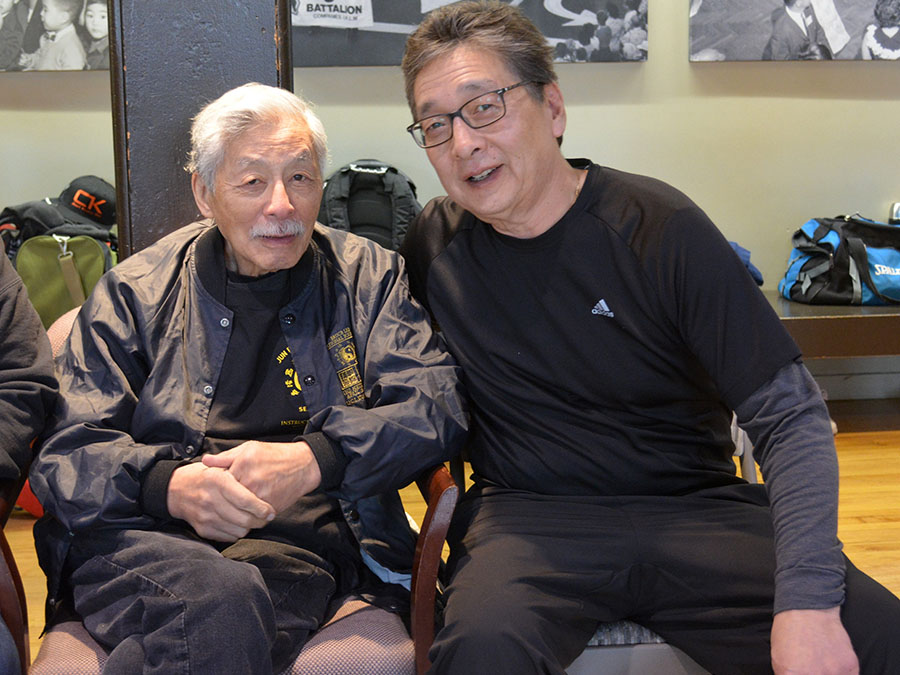 friend’s words to heart and continues teaching to this day.

Once the conference participants said their hellos and paid their respects to Mr. Kimura, it was time for everyone to get to know each other.  Attendees came from Washington, Oregon, Idaho, California, Arizona, Colorado, Illinois, New York, Massachusetts and Hawaii as well as from other countries, including Ireland, Spain, Belgium, Germany and Canada.  The NVC Memorial Hall was the perfect, welcoming setting for individuals of different backgrounds to come together harmoniously.

The training was led by master instructors, Sifu Andy Kimura, Sifu Burton Richardson, and Sifu Chris Kent.  Mr. Kimura even got in on the action, offering his insights and encouragement to the participants.

During the opening training session, the instructors and participants were honored by a visit from former NVC Commander, Rick Takeuchi. Incredibly, Mr. Takeuchi and his son Ryan are also former students of Mr. Kimura!

In an act of kindness and generosity, Commander Rick Takeuchi and Commander Dale Watanabe presented Mr. Kimura and the instructors with the beautiful NVC Challenge Coin.  This was a distinct honor and a memory that we will all cherish forever. 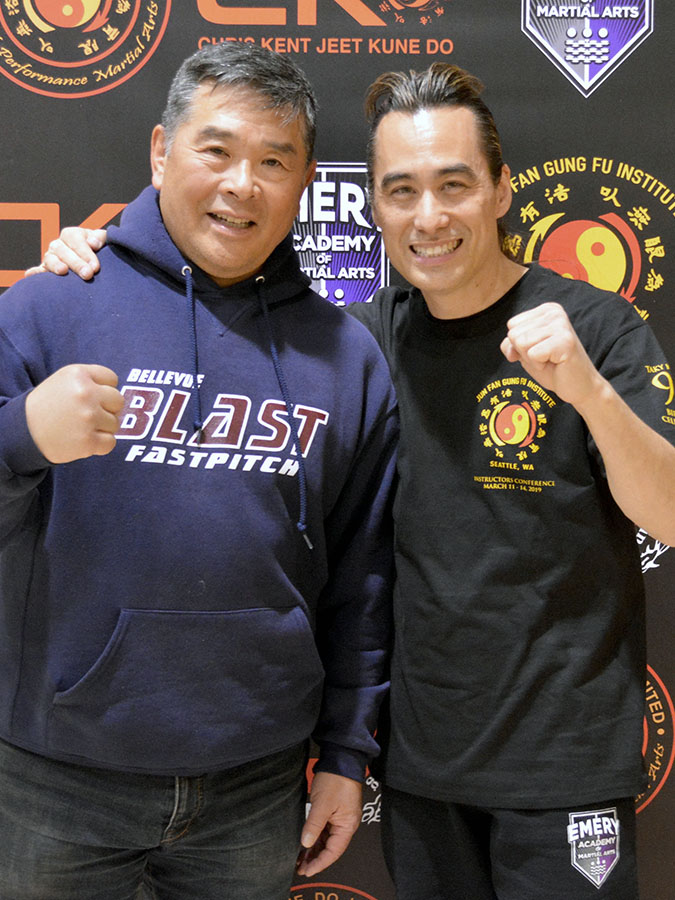 The martial arts training and birthday celebrations continued throughout the week.  Among the many highlights were a birthday dinner at Ivar’s Salmon House, attended by Ms. Linda Lee Cadwell, Bruce Lee’s widow;  a magnificent tour of the Wing Luke Museum;  an emotional visit to Lake View Cemetery (Bruce Lee’s final resting place);  and a graduation dinner at Tai Tung Restaurant (Bruce Lee’s favorite restaurant).  Mr. Watanabe was on hand to give tours of the Memorial Hall to our participants, who were all very appreciative to learn the history of the NVC.

It was a thrilling, emotional and positive week.  Over the decades, Mr. Kimura has touched the lives of countless individuals and lovingly helped people to become better humans, both in his grocery store and in the martial arts school.  We would like to express our gratitude to all of our friends at the NVC for helping us recognize and celebrate Mr. Kimura’s gracious contributions to our community.

Throughout the week, whenever I had a moment, I would sit with Mr. Kimura as the conference was taking place.  It was an honor for me to listen to his thoughtful, inspirational words and experience his kindhearted wisdom as he observed the training.  He would often remark on the beauty of the NVC Memorial Hall and how touching it was to have such a friendly and respectful group of people all gathered together.

With a twinkle in his eye and a heartwarming smile, he would reflect, “this is so precious,” as he placed his hands together in a gesture of gratitude.

[Matt Emery is a 4th Generation Japanese American from Renton, WA.  He is a grandson of a Nisei Veteran and is a former staff member of Densho.  He currently lives in Los Angeles, where he is the owner of Emery Academy of Martial Arts.