On Saturday, September 28, the NVC Foundation hosted a showing of the documentary, Never Give Up: Minoru Yasui and the Fight for Justice.

While introducing the film, Ken Mochizuki reminded us that Minoru Yasui was one of four Japanese Americans who fought the legality of the exclusion and forced detention during World War II. Fred Korematsu, Gordon Hirabayashi and Minoru are the most recognized of these four. Mitsuye Endo, the fourth individual, did not initially set out to challenge the incarceration, but became involved later when asked to be a plaintiff in the challenge. 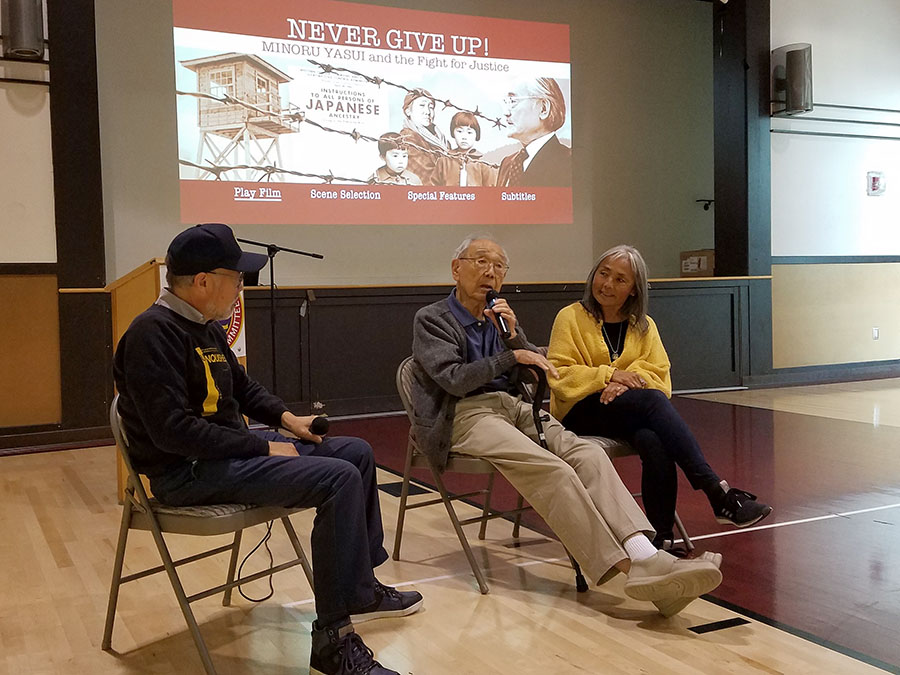 Through the voices of friends, family members, colleagues and through Min’s own words, the documentary highlighted the life, accomplishments and commitment of Minoru Yasui.

Minoru “Min” Yasui was born to Masuo and Shizuo in 1916. Masuo and his family ran the Yasui Brothers Company, a dry goods store and a farm in Oregon's Hood River Valley. Masuo’s active membership in the Methodist Church, Apple Growers Association, and Rotary Club vaulted him to a community leader among the 75 to 100 Japanese families in the area.

When he was just 15, Min helped found the Mid-Columbia Chapter of the Japanese American Citizens League (JACL) -- a patriotic civic organization for Nisei like himself. In 1933, after graduating salutatorian from Hood River High School, Min enrolled at the University of Oregon. His excellent academic skills and strong civic ties with the JACL continued through his college years. In addition, he joined the ROTC. Min graduated from the University of Oregon in 1937 and from the University of Oregon Law School in 1939. Despite his qualifications, law firms did not want to hire Min. He eventually took a job in Chicago as an attaché to the Japanese Consul.

Immediately following the bombing of Pearl Harbor, Min quit his job in Chicago and headed home to report for duty at Fort Vancouver. However, when he arrived for duty, he was denied the opportunity to serve his country due to his Japanese ancestry. Min returned to Portland and opened a law practice primarily representing Japanese American citizens. As anti-Japanese sentiment grew, Min’s father, Masuo, along with other leaders in the Japanese American community, was taken by the FBI. 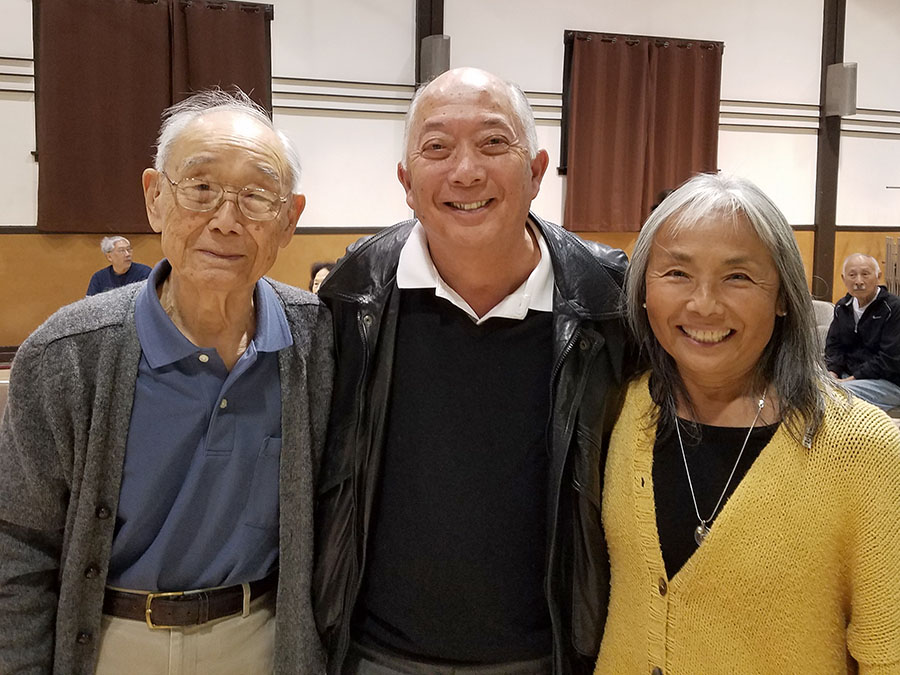 When President Roosevelt signed Executive Order 9066, curfew and travel restrictions were put in place. Min felt this edict, distinguishing one citizen from another on the basis of ancestry, was absolutely wrong. Most importantly, Min saw Executive Order 9066 as a challenge to anyone’s rights as a citizen. If the U.S. government could do this to a select population -- those of Japanese ancestry -- they in fact could do this to any group. He put his professional career on the line and set out to purposely violate Public Proclamation No, 3, which established the nighttime curfew and travel restrictions.

Min was eventually arrested for violating curfew. After a weekend in jail, Min was released on bail. A week later, Mike Masuoka, national secretary of the JACL, filed the following statement: “The JACL opposes test cases to determine the constitutionality of military regulations. We have pledged our whole-hearted cooperation.” In spite of the JACL rejection, Min pressed on. He wrote letters, including one to General Dewitt, commander of the Western Defense Command, questioning the constitutionality of the curfew and travel restrictions.

By May, all Japanese Americans from Portland, including Min, were imprisoned in the North Portland Livestock Exposition building and later taken to Minidoka. Min’s mother and two youngest siblings, Homer and Yuka, were taken to the Pinedale Assembly Center. By fall, they were moved to Tule Lake. Michi, Min’s older sister, violated travel restrictions by leaving school in Eugene before she was scheduled to be removed. She took a bus to Denver, which was outside of the exclusion area boundaries, with the intent of establishing a home where her family could later relocate.

In November, Min was ordered to report for trial. On November 16, 1942, the District Court of Oregon found the curfew order to be unconstitutional as it applied to U.S. citizens. Yet, Min was still sentenced as the judge declared Min had given up his citizenship when he went to work for the Japanese Consulate in Chicago. The judge sentenced Min to one year in jail and a $5,000 fine. For nine months, in solitary confinement, Min wrote hundreds of letters to family, community members and government officials. In addition, he sent articles to his secretary who was imprisoned in Minidoka. His secretary typed these letters for the camp newsletters. Friends in Minidoka formed the Civil Liberties League and distributed flyers to support Min’s legal defense. Mike Masuoka (JACL) responded by disbanding this group.

Despite this opposition, Min did not falter and this steadfast refusal to yield was noted by JACL. Two months after the Civil Liberties League was disbanded, the JACL reversed its policy and announced it would file a Friend of the Court Brief on Min’s behalf as he appealed the District Court’s decision. Ultimately, the U.S. Supreme Court reversed the District Court’s ruling regarding Min’s citizenship, stating he was indeed a U.S. citizen. However, the court simultaneously affirmed his conviction for breaking the curfew, stating citizen’s rights could be overridden in time of war. The court felt Min had already served a sufficient sentence as he was released from jail and sent back to Minidoka. Despite this ordeal, Min was resolute in his faith in the constitution. He believed all men are created equal and there should be equal justice under the law.

In June 1944, Min was granted approval to leave Minidoka and eventually went to join his family in Denver. With the help of the ACLU, Min was granted a license to practice law in Colorado. Through his law firm, Min tirelessly supported Japanese Americans as well as other individuals fighting for their civil rights. Min traveled the country talking to people in support of naturalization rights for Issei, which had become a priority of the JACL. He and other activists helped to found numerous community organizations dedicated to social justice. In 1967, he was made Executive Director of Denver’s Human Rights Commission.

In 1983, Min and his attorney, Peggy Nagae, reopened his legal case based on evidence that had been suppressed and altered by the government during the war. Min’s case was heard by the district court and his wartime conviction was reversed. However, the judge denied declaring the government proclamation for curfew as unconstitutional.

Many feel Min’s most notable work came in the later years of his life with his tremendous effort to seek an official government apology and financial redress for those of Japanese ancestry who were imprisoned during World War II. Attending hundreds of meetings, giving speeches and writing thousands of letters, Min noted the “quality of our struggle makes us human and brings out the best in people. We shall not let this wrong happen again.”

Minoru Yasui died in 1986, two years before President Ronald Reagan signed the Civil Liberties Act of 1988. In 2015, President Barack Obama awarded a posthumous Presidential Medal of Freedom to Min for his years of leadership in civil and human rights, as well as for his determined challenge of the incarceration of Japanese Americans in concentration camps during World War II.

The program ended with a question-and-answer session. Min’s brother, Homer Yasui, accompanied by his daughter Meredith, shared his experiences growing up in Hood River, where his parents laid a strong foundation for education. The Yasui family was able to store many of the family artifacts, documents and photographs in a sub-basement at their store. When the store was sold in 1946, these items were moved to an old barn. In 1990, after their oldest brother died, Yuka and Homer began sorting through the items, which provided a rich history of the Yasui family. Many of the artifacts are now housed in the Oregon Historical Society, the Japanese American National Museum and the Oregon Nikkei Legacy Center.

Homer also shared with the audience the title of a book about his family. Lauren Kessler, University of Oregon professor, wrote: Stubborn Twig: Three Generations in the Life of a Japanese American Family after being inspired by the story of Min’s sister Michi. Homer worked closely with Ms. Kessler as she researched this book.