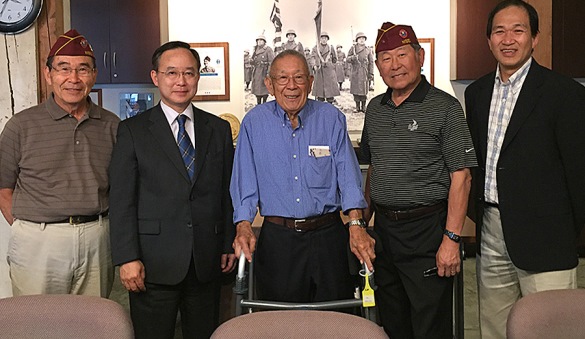 In keeping with tradition, the annual summer cookout was held on Saturday, July 29th.   Just over a hundred members along with their families and friends were served a delicious steak or teriyaki salmon dinner.

Our annual NVC Hall and Memorial Wall cleanup was held on Saturday, June 24th.  Due to the active schedule of the Hall, it was decided to hold the cleanup in conjunction with the installation of additional Memorial Wall bricks.

We are a new committee and are chartered to develop and conduct events and programs for veterans and their families through community events, sponsorships, and grants.  Here are a few upcoming events we would like to share with you.

Go For Broke National Education Center (GFBNEC) today announced the upcoming opening of Nikkei Samurai: Japanese Swords and the Nisei Veteran, a special exhibition on display from Aug. 15-Sept. 17, 2017, as part of this year's Nisei Week Festival in Little Tokyo.

On a very hot August 3rd, the Japanese community welcomed the new Japanese Consul General Yoichiro Yamada.  The welcome was held in the Kimochi Room at Keiro Northwest and hosted by the Nikkei Community Network, including NVC and NVC Foundation...

NVN Partners with the National Museum of the United States Army

The National Veterans Network (NVN) is honored to announce its collaboration with the National Museum of the United States Army to develop an exhibit featuring the outstanding military service of Nisei soldiers during World War II and to increase the U.S. Army historical collection to preserve the story of the Nisei Soldier.

On May 29, 2017, the National Park Service opened a temporary visitor center at what was once the Minidoka War Relocation Center, also known locally as Hunt Camp in Idaho. The temporary Visitor Center will open to the public for the summer season providing visitor services onsite for the first time ever.