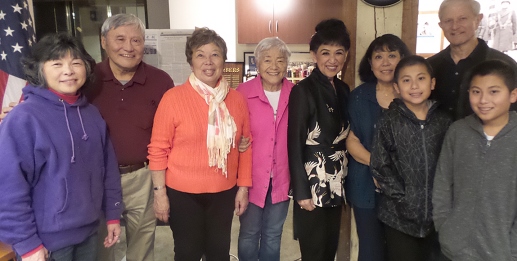 While Minidoka looms large in the story of Seattle Japanese American forced incarceration, far less-often remembered is Camp Harmony, a temporary stop for those forcibly removed in the wait for the construction of permanent concentration camps. To preserve the history of this temporary assembly center, the Camp Harmony Committee was formed in 2013.  It was with great privilege that the NVC Foundation welcomed the Camp Harmony committee to the Vets Hall

Support the NVC Foundation through GiveBIG -- Coming on May 10, 2017

SAVE-THE-DATE: Japanese American Soldiers and the Liberation of Dachau

NVC and NVC Foundation Invited to I Corp Change of Command

The 4th grade students from Christ the King School had the pleasure of visiting the Nisei Veterans Committee Memorial Hall on March 22nd. The goal was for students to learn more about the treatment of Japanese Americans during WW2 and the incarceration camp experience.

The NVC and NVC Foundation joined 17 community organizations to bid farewell to the Consul General of Japan in Seattle, Masahiro Omura.  After three and a half years in Seattle, Consul General Omura has been requested to return to Tokyo for reassignment.

Aaron Ramos is one of this year's recipients of the NVCF Shiro Kashino Memorial Scholarship. He is the son of Andrea Mano and the grandson of Irene and George Mano.  Here is his essay on the Nisei Veterans' legacy.

Emi Nakashima is one of this year's recipients of the NVCF Shiro Kashino Memorial Scholarship. She is the daughter of Dana and Craig Nakashima and the grandchild of Grace and Satoru Ichikawa.  Here is her essay on the Nisei Veterans' legacy.

This emotional article is from a speech given at the dedication of the William Nakamura courthouse in Seattle, Washington in 2001.  Submitted by Eric Saul, noted historian.

My Identity as a Japanese American Sansei

Stan Shikuma is a member of the NVC Foundation and NVC Newsletter. This is the text of his speech recently given at the Seattle JACL Annual Banquet addressing the question of what it means to be Japanese American today.

Conspiracy of Kindness: You've Given Me Life

The program, “Conspiracy of Kindness: You’ve Given Me Life,” on April 9, 2017, was a great success.  This was the second of three events of “The Holocaust and Japanese American Connections” presented in proud partnership by the NVC, the Holocaust Center for Humanity, the UW Department of American Ethnic Studies, and the Consulate-General of Japan in Seattle.

Former Seattle Times Reporter Alex Tizon passed away on March 23rd.  Alex's writings inspired the NVC to create the Medal of Honor Committee that led to renaming the Federal Courthouse in Seattle to William Nakamura.