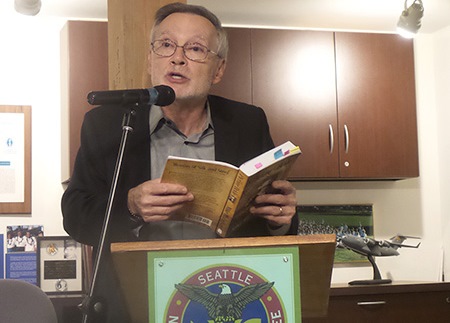 Author Mike Malaghan shared his journey as a writer to the culmination of his first novel, Picture Bride. Picture Bride is the initial book in a historical fiction trilogy honoring the Japanese Americans who fought during WWII.  Unlike most novels written about the Japanese American experience, Mike takes the reader back to Japan focusing on the lives of Japanese before and as they migrated to Hawaii.

Admiral Harry B. Harris, Jr. is the first Asian-American to achieve the rank of Admiral in the U.S. Navy, the highest-ranking Japanese American.  And we are very proud to claim him as a Life Member.

On this past January 27, 2017, the Executive Director of The National Veterans Network (NVN), Christina Sato-Yamazaki, executed the first outreach to the Japanese American Seattle community in the NVC hall for the opening of the National Museum of the U.S. Army in 2019.

The following article was originally published in the Northwest Nikkei, March 1991 edition.  "Nisei soldiers killed in action. Just barely out of high school, many died so young."

The Installation banquet started in 1947 as a dinner and dance and presents awards to scholarship recipients as well as new lifetime members. The luncheon also recognizes and installs new NVC and NVC Foundation officers.

King County Council Resolution on the 75th Anniversary of EO 9066

Conspiracy of Kindness: You’ve Given Me Life

On Sunday, 9 April 2017, the legacy of Japanese diplomat, Chiune Sugihara, “Conspiracy of Kindness: You’ve Given Me Life,” will be presented at 2:00 p.m. at the Blaine Memorial United Methodist Church. This is the second of three events in the series “The Holocaust and Japanese American Connections.”

Japanese American Soldiers and the Liberation of Dachu

We come together once a year for Japan Fair 2017!  This year it will be held on July 8th and 9th at the Meydenbauer Center in Bellevue.  Experience the traditional and modern Japanese Arts and Culture, hot products from Japan and enjoy live music and performances.