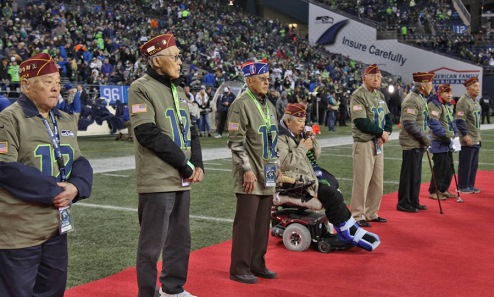 November 20, 2017 will be remembered as a special day when the Seattle Seahawks honored the Nisei Veterans during a wonderful halftime ceremony in front of a sold-out stadium of more than 68,000 fans during its annual “Salute to Service” game... the Seahawks did an amazing job of recognizing various persons and organizations highlighting their honorable service and contributions to the freedoms we possess as Americans...

SCAM ALERT: VA Refinancing Offers That Sound Too Good To Be True

SAVE-THE-DATE: The Go For Broke Spirit

Give a Hero a Coffee Break!

The idea behind the Cup of Joe For A Joe program is to give people at home an opportunity to send a Cup of Joe (Troops call them a COJ) and a letter of thanks to a Soldier, Airman, Sailor, Marine or Coast Guardsman overseas.

Speaker Series: Proof Of Loyalty and Liberation of Dachau

The November Speaker Series was presented in two parts.  The first presentation was the showing of "Proof of Loyalty" which outlined Kazuo Yamane as a member of the Military Intelligence Service during WWII.  Second was Frank Burn's presentation of the Liberation of Dachau and growing up in Hawaii.

Inspiring Future Generations: Friends and Supporters Who Helped Those Incarcerated

The NVC Foundation is proud to announce their partnership with the Wing Luke Museum on another important graphic novel project.  The novel will feature those friends and supporters who were there to help the Japanese Americans who were incarcerated in concentration camps during World War II

There are two new veteran IDs that provide a more portable and secure alternative for those who served the minimum obligated time in service, but did not meet the retirement or medical discharge threshold.