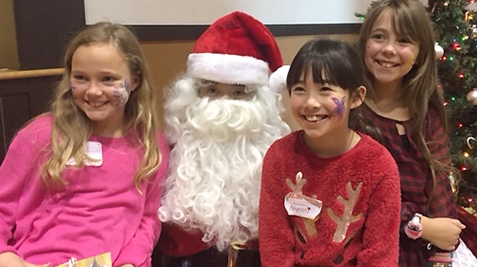 This is a 71-year-old tradition that has meaning to so many of us in the Seattle community.  The NVC Children’s Christmas Party has been attended by thousands of people throughout the years and we are thrilled to be able to continue the tradition for the next generation.  The faces of all the smiling kids who attended this year’s Christmas party tell the whole story.

SAVE THE DATE: NVC and NVC Foundation Officer Elections

SAVE THE DATE: Olympia Day of Remembrance

The elections of the 2017 officers will be at our Friday, February 17, 2017 General Membership meeting.  We encourage all NVC and NVC Foundation members to participate in this very important process to elect your 2017 leadership.

Honoring the Past, Educating the Future -- Now More Than Ever

Our NVC Foundation Education Program gives tours of the NVC Hall and provides speakers on Honoring the Past, Educating the Future.  Over the last month, the requests for school tours and programming have increased.

WASHINGTON — Los Angeles County Superior Court Judge Vincent Okamoto was honored as one of the “Heroes of America” by the American Veterans Center during an awards ceremony on Nov. 6...

Day of Remembrance 2017: How Could Concentration Camps Happen?

On Saturday, 18 February 2017, a Day of Remembrance program, “How Could Concentration Camps Happen?” will be held at 1:00 p.m. in Kane Hall 130 on the University of Washington campus.  Read more...

The monthly Nisei Lunch program started the New Year off with a special birthday celebration for one of our longtime NVC members, Tak Matsui.  Tak celebrated his 100th Birthday surrounded by his immediate family and 60 fellow lunch guests...

In Recognition of EO 9066, Year of Remembrance

Glimpses of a Forever Foreigner, the book of poetry by Lawrence Matsuda and artwork by Roger Shimomura, will be unveiled as a year-long exhibit at the Wing Luke Museum.  A preview reception will be held on Thursday, February 16 from 6 to 8 p.m. and is open to the public.

In this issue, we will cover and condense, as much as possible, the subject of VHA Organizations and be referred to the website that lists the departments/clinics that are Administrative or Clinical.  Read more...