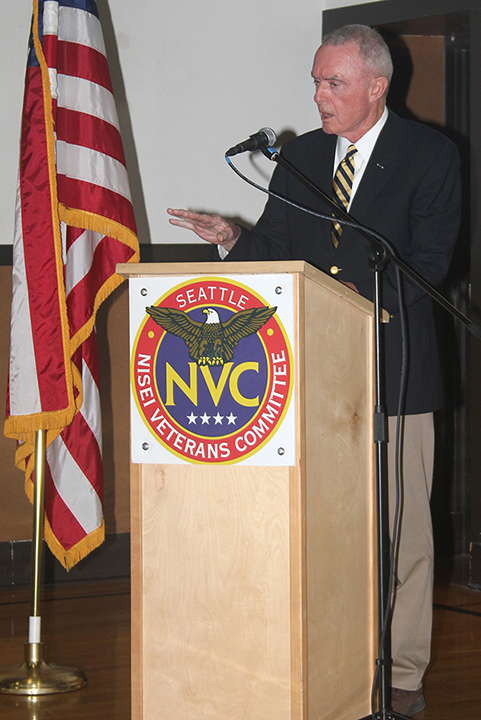 NVC had a very special visitor and speaker on Labor Day, 7 September 2015.  Retired General Barry McCaffrey, his wife Jill Ann, and three other family members came to our NVC Hall to speak about "Challenges to US National Security". Gen McCaffrey is often seen on NBC News as their national security and military consultant.  He now resides on Queen Ann hill to be near his children and grandchildren.

The General's visit was arranged by Curtis Thompson, president of the William Nakamura Chapter of the AUSA.  He asked if we would co-host this visit and hold the event at our NVC Hall. Through Curtis Thompson, NVC extended an invitation to Gen McCaffery to tour our Medal of Honor museum and Memorial Wall.  The invitation was accepted and Gen McCaffrey and his family arrived an hour early to tour NVC Memorial Hall with NVCF docents Rian Ebesugawa and Chris Sketchley. He was very interested in the history of the displays in the museum and mentioned that he would like to return with his family to view the museum at a more leisurely pace in the future.

Gen. McCaffrey proceeded to the gymnasium, where approximately a hundred visitors awaited, and he began his talk by praising the feats of the 442nd veterans. He mentioned that his grandfather was the Chief of Staff of the 92nd Infantry Division, a segregated African American unit, in Italy during WW II.  The 442nd was attached to the 92nd Div. when they made their assault on the Gothic Line in Italy during the latter stages of WW II.  The General said his grandfather spoke very highly of the Nisei soldiers in the 442nd and often stated that they were the best in the US Army!

General McCaffrey spoke of the many problems facing the security of our country.  He mentioned the sophisticated methods utilized to ensure our security and which he credited with keeping our country relatively secure from terrorist attacks.  He believes that Edward Snowden, a former CIA employee now living in Russia, caused great damage to our surveillance operations when he released details of US operations to the public.  The General stated that our government must now rebuild different systems and procedures for our security.

His talk was followed by a lively question and answer session that ranged across questions concerning the refugee problem in the Middle East, the Iran nuclear agreement, Russian movement in Ukraine, and US foreign aid.  He stated that it was much better to send foreign aid rather than troops to assist in foreign conflicts.  Following the very informative talk, the General and his family graciously mingled with the audience and posed for pictures with the NVC Nisei veterans who attended the event.

The Nisei Veterans Committee would like to extend our heartfelt thanks to Curtis Thompson from the AUSA for arranging our evening with General Barry McCaffery.