I would like to take a minute to reflect on some NVC veteran activities in which we have taken part over the past couple months that have caused me pause for thought and that I would like to share with you.

As an important function of the Nisei Veterans Committee, we have had the honor of presenting an American flag to families of departed Japanese American veterans be they members of NVC or not.  This responsibility continues to touch a chord in both us as presenters of the flag as well as the family as we pay tribute with the flag for the service of the deceased in their service to their country.  My waking years were in Camp Minidoka where many of these men left parents and siblings behind barbed wire to so heroically defend their family honor and also, at that time, their not-so-honorable country.  It is such an honor to be able to make this final American flag tribute to these departed veterans! 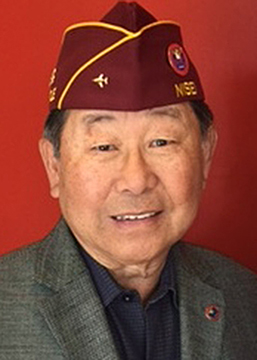 It was during my attendance at the 2008 Minidoka pilgrimage that I learned that it was my father, Kamekichi Tokita, and his fellow artist friend, Kenji Nomura, who constructed and hand painted the Honor Roll with the names of all the young Japanese Americans that volunteered into the U.S. military out of Minidoka to serve with the 100th Battalion, 442nd RCT or the Military Intelligence Service.  Neither I nor my family was aware of our father's contribution towards honoring the volunteers from camp until the docent from the U.S. Parks Department mentioned the names of Mr. Tokita and Mr. Nomura and asked if anyone knew either of the two men ... and I certainly did!

In rapid succession during this month of September we have had veteran related activities where our Nisei Veterans Committee has participated.

On the Labor Day evening of 7 September, we had a distinguished visitor, retired General Barry McCaffrey, at a gathering at our NVC hall (see full article in this issue).  We were co-hosts to Gen McCaffrey and his family with the William Nakamura Chapter of the AUSA (a US Army veterans organization).  When we informed Gen McCaffrey about our Memorial Wall and our Medal of Honor museum with predominately WWII slant, he was very interested in a guided tour and even offered a one-hour early arrival to our hall to partake in it.

He was particularly interested in the 442nd RCT's attachment with the 92nd Infantry Division during their WWII activities in Italy.  Gen McCaffrey's grandfather was the Chief of Staff of the 92nd in Italy and always spoke very highly of the 442nd and stated that the 442nd troops were the finest in the U.S. Army in the European theater!  The visit to our museum so intrigued the General that he brought four other members of his family for the museum tour and his "Challenges to US National Security" presentation.

On the 12th of September, the NVC manned the NVC/NVC Foundation display booth at the 18th Annual "Aki Matsuri" festival held on the grounds of the Bellevue College campus, We were responsible for interpreting an interesting array of visual aids portraying the WWII Japanese American military participation, as well as the forced incarceration of Japanese American families from the western United States.  The NVC had several veteran members there to answer any and all questions of the military training activities in the U.S. and deployment in Europe and the Pacific. Additionally, we were there to answer questions regarding the Japanese American incarceration.  The crowds were curious and there was a constant flow of visitors with a steady flow of questions.

On the 19th of September, the NVC hosted a luncheon in the NVC gym hall for the Japanese Ground Self Defense Force Army Unit and the 7th ID from Fort Lewis Army Base that have been training jointly at the U.S. Army Yakima training center.  This is the third year the NVC has invited both participants to our NVC hall to enjoy a delicious potluck and hot-dogs and chili luncheon.

Major General Thomas James, Commander of the 7th ID and Major General Seigo Furuta both expressed their gratitude for the gathering as they and their respective forces enjoyed not only the delicious food, but also the tours of our NVC Museum and NVCF Memorial wall.

This year's activity also featured a visit by Seattle's Consul General of Japan, Masahiro Omura, who honored eleven WWII MIS veterans with a special certificate.  The certificate individually thanked each MIS veteran for his invaluable contributions and service during the occupation of post-war Japan.