The evening of February 28, 2015, was very nostalgic to many Nisei in attendance at Todd Matthew’s Speaker Series presentation at NVC Hall.  His talk and power point slideshow took us back to Seattle’s local Japanese community during the 1900’s.  The pictures depicting some very familiar places, peoples, events were taken by a Japanese American photographer, Elmer Ogawa, and discovered in the Special Collections of the University of Washington Libraries. 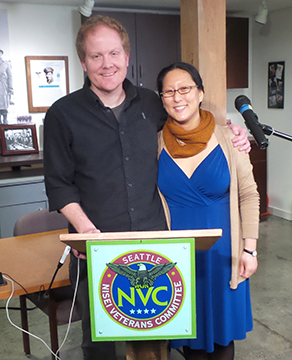 Matthews is a reporter, editor, photographer, and freelance journalist whose work has appeared in more than a dozen newspapers and magazines in the Pacific Northwest.  Todd earned an Associate Degree from Seattle Central College and a Bachelor’s Degree in Communications from the University of Washington.  He has received numerous awards for his photojournalism and freelance work and is an editor, reporter, and photographer for the Tacoma Daily Index.

Originally, Todd was researching the PNW Asian archival papers for information on the Wah Mee Club massacre but became intrigued by the numerous photos and writings of a local Japanese American photojournalist, Elmer Ogawa.  Seems that Elmer kept everything and may have been a “hoarder” of sorts. Combing thru all his correspondence and home movies and 14,000 black & white negatives and 7,000 black & white prints in Elmer’s collection, Todd was able to piece together much of Ogawa’s life.

Born in 1905, Elmer spent his teenage years working summers in Alaskan canneries while attending the University of Washington and graduated with a business degree. He moved to the East Coast where he worked as a salesman, married his wife Florence, had son Herb, divorced, returned to Seattle, and then freelanced for a variety of Asian American newspapers.  Todd found documentation of Elmer having served in the US Army between 1942 thru 1945.

To help pay the bills, Elmer was also employed by Isaacson Iron Works as a pipe fitter/boilermaker. In many of the blue-collar taverns he frequented after hours, Elmer’s photos were posted on the walls.  Examples include places like the Bamboo Inn Café in Chinatown, Tim’s Tavern on Capitol Hill, Barney’s Café Downtown, or the Klondyke Café in Pioneer Square.  He was a regular who photographed the city’s rowdy and festive nightlife during the 1950’s-era in Seattle at places that have long since disappeared.

Todd said he located and interviewed Goldena Ogawa, Elmer’s 78-year-old daughter-in-law who now lives on her daughter’s farm in rural Arkansas, to get a better understanding of Ogawa family dynamics.  Goldena, who was married to Elmer’s only son, appears to be Elmer’s closest living relative.

Todd also located and interviewed the former Broadway singer Pat Suzuki, who was 82 years old and living in New York City.  Ogawa photographed Suzuki when she performed at The Colony nightclub in downtown Seattle during the 1950’s and the pair became casual acquaintances and often went out with a group of people to late-night diners and bars.

Matthews then located and interviewed Harry K. Honda, Ogawa’s editor at the Pacific Citizen, to get a better sense of Ogawa’s journalism career.  At the time, Honda was 94-years-old and living California.  He has since passed away.

Finally, Todd was able to acquire records (birth certificates, death certificates, obituaries, etc.) to piece together Ogawa’s family history.  His father died when Ogawa was just a teenager and Ogawa’s sister was committed to a mental institution and underwent a lobotomy.

Elmer Ogawa was a freelance photographer who spent much of his time photographing people in the Japanese community and the local taverns that he drank at. He always carried around his camera and was able to capture photos of bar fights and auto accidents.

Todd Matthews is writing a biography of the late Japanese American Photographer, Elmer Ogawa.  As indicated by his thorough research and documentation style, Todd is still asking for community input before he finalizes his book.  He welcomes any information or anecdotal recollections about this overlooked but unforgettable character in Seattle’s Japanese American history.  You can contact Todd at (206) 399-9907.

The following excerpt from Todd’s draft manuscript shows the author’s colorful and skillful descriptive style as well as the book’s distinctive Seattle flavor.

“Ogawa, whose mother was German-Irish and father was Japanese, was an easy figure to spot around town.  At five feet, eight inches tall, weighing nearly 200 pounds, he had a husky, overweight physique, jet black hair combed back in a shiny slick, meaty jowls that hung beneath his eyes like saddlebags, cork plug nose, thin mustache, thickly forested eyebrows, wide smile.  Perched at a bar, Ogawa would have been impossible to ignore…” ---Todd Matthews

“As a photographer for the Seattle-based newspaper The Northwest Times, Ogawa reported on everyday life in the ethnically diverse neighborhoods along a stretch of Jackson Street that ran from downtown Seattle, past the Japanese, Chinese and Vietnamese owned shops and restaurants, and into what was known to African American locals as the Central District.  It was an easy enough beat, considering Ogawa lived for a spell in the six-story Bush Hotel, a bulky building that towered over the corner of Seventh Avenue and Jackson Street, the heart of Seattle’s Asian American community…”  ---Todd Matthews