Yosh Nakagawa was the featured speaker for the October 26th NVCF Speakers Series.  He goes back a long ways with the NVC and their support and encouragement of athletic activities.  Many remember Yosh when he took charge of the NVC Sports program at the urging of Tom Onishi.  The program helped organize and sponsor many teams, which kept the community youth together… teams like the Mighty Midgets.  Yosh acknowledges 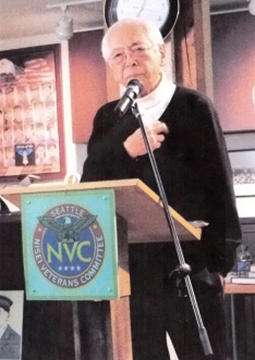 the NVC for doing this and much more for the community.  But let us go back to the beginning.

Yosh Nakagawa was born in 1932 in Seattle, Washington.  His immigrant parents opened a grocery store in the Central Area, located where the campus of Seattle University is now situated. The store was also their home before the war because they could not own property, as his parents were not U.S. citizens (at the time). After the attack by Japan, the family was removed physically, against their will, to be incarcerated without due process of law by Executive Order 9066 signed by President Roosevelt.

Yosh was in the 4th grade thru middle school while incarcerated in Puyallup and then in Minidoka Camp.  When they were released, the family had nothing to return to: no home, no property, no place to go.  Yosh explained that his parents never spoke to him about their feelings and struggles because the culture of the Meiji-era Issei is one of stoicism and “gaman”, to quietly bear the unbearable. So he believes their story will be left unsaid if people like us don’t uplift it…if we don’t relate the awesomeness of our parents, the Issei, and their loyalty to making America a better place. In many cases, they gave up their children to die for America.

After camp, Yosh came back to Washington Middle School and then Garfield High School in Seattle.  In those days he said there existed an incredible cultural diversity in the population, unique to the Central Area where he lived.

Because of his love of sports, Yosh Nakagawa wanted to work for a sporting company and applied to Osborn & Ulland.  Little did he know that it would be his first and only job, because he stayed on for 45 years -- a lifetime career!  By the time he retired, Yosh rose to become the President of Osborn & Ulland.  It was this job and all the sports connections that allowed him to be so generous with sponsorships, prizes, gifts, sports gear and other items supporting the athletic activities of the community organizations. 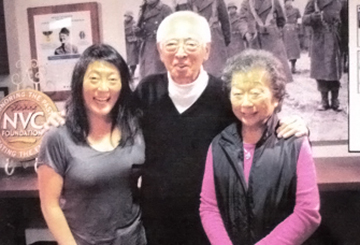 Yosh also brought diversity into the Osborn & Ulland organization by the workers he hired. He had people of different ethnic backgrounds - African Americans, Hispanic Americans, Chinese Americans, Filipino Americans as well as Japanese Americans - employed there at one time or another. He worked hard and expected his workers to do the same or they didn’t last, but they were always given the chance to prove themselves.

Yosh encouraged women’s rights in tennis at a time when they were not allowed to join the Men’s Tennis program at the UW. Women were forced to use men’s equipment and men’s shoes during that time and he knew that wasn’t right… this was before Title IX (The UW honored Yosh in 1972 for his work on behalf of women.)

Yosh also broadened the types of sporting equipment originally carried by the Norwegian- owned store.  They were initially focused on skiing and hunting gear, so he introduced other sports equipment for golf, basketball, baseball, and football.  Yosh remembers that during his early years he could not enter thru the front doors of the Seattle Tennis Club to make deliveries. There were no Athletes of Color or Women among UW athletes.

But thru sports he was able to meet Hank Kashiwa, Wayne Wong, Billie Jean King, Arthur Ashe, Bjorn Borg, Jackie Robinson and other notable athletes of the sports world, and things changed because of the persistence of people of good will. Yosh feels he has lived in the golden era where many barriers were broken through sports.

He was thrilled by the many examples of books now being written about the Japanese American experiences because they are written from a JA perspective.  JA’s are interpreting their own history and not letting the Western Euro culture interpret for them.  He admonished…we’ve got to speak up for ourselves and not let others speak for us.  So Yosh has gone all over the nation and abroad, to tell his story – “in gratitude to his heritage”.

In closing, Yosh Nakagawa said, ”Being American means having all these different stories, these different ways of sharing, that makes us find our common ground so we can work together.  Getting to equality means acknowledging the stories and the wrongs.”