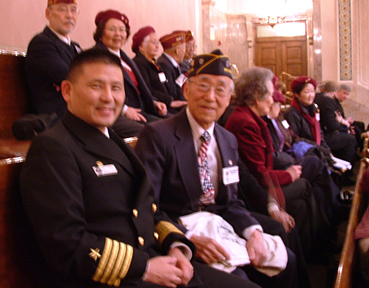 During the State Legislature Day of Remembrance Program, on February 19, 2008, which honored the Nisei Veterans Committee, we were honored to be joined by Captain Reid S. Tanaka. Captain Tanaka is the first Japanese American to serve as the Commanding Officer of a Navy Submarine Base.

Captain Tanaka is a 27-year veteran of the Navy and is 47 years old. He is a Yonsei, and a native of San Francisco, California.   Before becoming Commanding Officer of the Bangor Submarine Base, he was a submarine Commander. In the near future, he will be stationed in Yokosuka, Japan with the aircraft carrier, George Washington. We wish him the best in his new assignment.