The National Oceanic and Atmospheric Administration (NOAA) honored the late Dr. Bell M. Shimada, a Japanese American fishery scientist, by naming a fisheries survey vessel in his name.  The 208-foot Bell M. Shimada, built by VT Halter Marine Inc. of Moss Point, Mississippi, was launched on September 26, 2008, and is the fourth vessel of the same class designed to collect data on the nation’s commercial fisheries, other sea life and ocean conditions.  During Dr. Shimada’s career as a fishery research biologist lasted only 12 years, he made a distinctive mark in the study of Pacific tropical tuna stocks. 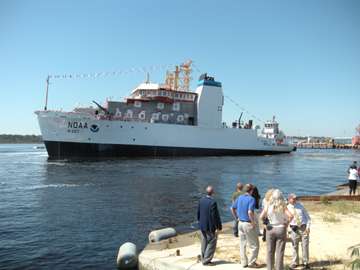 ccording to a 2007 NOAA press release, Bell M. Shimada will be initially home ported on the West Coast to conduct surveys of fisheries in the western coastal region of North America from Alaska to Arizona. A team of students from Marina High School at Monterey Bay, California, won a regional NOAA contest to name the vessel.  The students subsequently participated in her keel laying ceremony in June 2007. “The contest was an educational initiative to help students learn more about their region's marine and coastal environment as well as to generate a greater interest in scientific studies,” the NOAA release said.

Dr. Shimada, a second generation Japanese-American, or Nisei, was born in Seattle, Washington, attended the University of Washington School of Fisheries in 1939, was incarcerated in an internment camp on April 29, 1942.  He volunteered for the 442nd Regimental Combat Team and trained in Camp Shelby, Mississippi.  In August 1943 he was transferred to the Military Intelligence Service (MIS) for Japanese language training at Camp Savage, Minnesota.  In April 1944, he was transferred again to the Army Air Corps in Orlando, Florida, which was followed by an assignment to Hawaii as translator/interpreter.  In May 1945, he was assigned to Guam to intercept Japanese communications and in August 1945 was deployed to Tokyo to survey damage caused by US bombings.  He was honorably discharged in February 1946.

Following discharge, Shimada remained in Japan working for the U.S. Occupation authorities as a fishery biologist until December 1946, when he returned to University of Washington to obtain his bachelor and master degrees in fisheries.  In September 1948, the Bureau of Fisheries, US Fish and Wildlife Service employed him, and from December 1948 to January 1951 he served with the Pacific Oceanic Fisheries Investigations (POFI) in Honolulu, Hawaii, as a seagoing biologist.  In February 1952 Shimada was assigned to the Inter-American Tropical Tuna Commission in La Jolla, California.

He obtained his doctorate degree from the University of Washington in 1956.  By this time, he was a senior scientist, and developed and published valuable information on the spawning, distribution and feeding patterns of tuna, gaining national and international recognition.

In 1957 Shimada and Townsend Cromwell, oceanographic scientist, worked together researching the distribution of tuna throughout the Pacific Ocean.  They were enroute to join their research party on June 2, 1958, when their plane crashed near Guadalajara, Mexico, killing both scientists.

In Hawaii, Shimada married the late Rae Shimojima, a native of Portland, Oregon, and secretary to the POFI Director. They have two children, Allen and Julie.  Allen is a fishery biologist at NOAA’s National Marine Fisheries Service headquarters in Silver Spring, Maryland.

In her remarks at the christening and launch, Julie Shimada offered the following, "I hope the Bell M. Shimada is a lasting testament that no life is too short, no career too brief, no contribution too small, to make a difference."