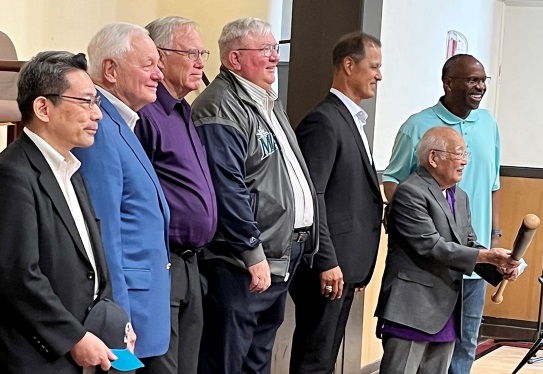 On August 27th this past season, the Mariners inducted their former superstar, Ichiro Suzuki, into the Mariner Hall of Fame.  One of the Mariner events that day was a community event at NVC discussing the “Impact of Ichiro.” Following a tour of our building and museum conducted by Chris Sketchley, the dignitaries assembled on our gym stage for the panel discussion.

The Fundraising Committee provides an update on the Mardi Gras Gala NVC Foundation Fundraiser to be held on Saturday, February 4, 2023 from 5:00 pm to 11:00 pm at the Renton Pavilion Events Center, 233 Burnett Avenue South, Renton, WA 98057. To learn more about this event, click above..

This article was originally written by Terry Shibata in 2019; he passed on in 2021 -  9:48 AM, Sunday, December 7, 1941. Imperial Japan bombed Pearl Harbor on that day. That began the hysteria of the Seattle community and the United States against the people of Japanese ancestry.

The NVC and NVC Foundation 2022 - 2023 Scholarship Program will award up to five (5) $3,000 higher education scholarships in March 2023. Student’s may apply to multiple scholarships however, only one scholarship will be awarded per student.

The Defense Commissary Agency (DeCA) has been hard at work spreading the news to Veterans about their ability to shop at Department of Defense commissaries. Engaging with Veterans, DeCA has learned that while many are now utilizing this benefit, others still are unaware.