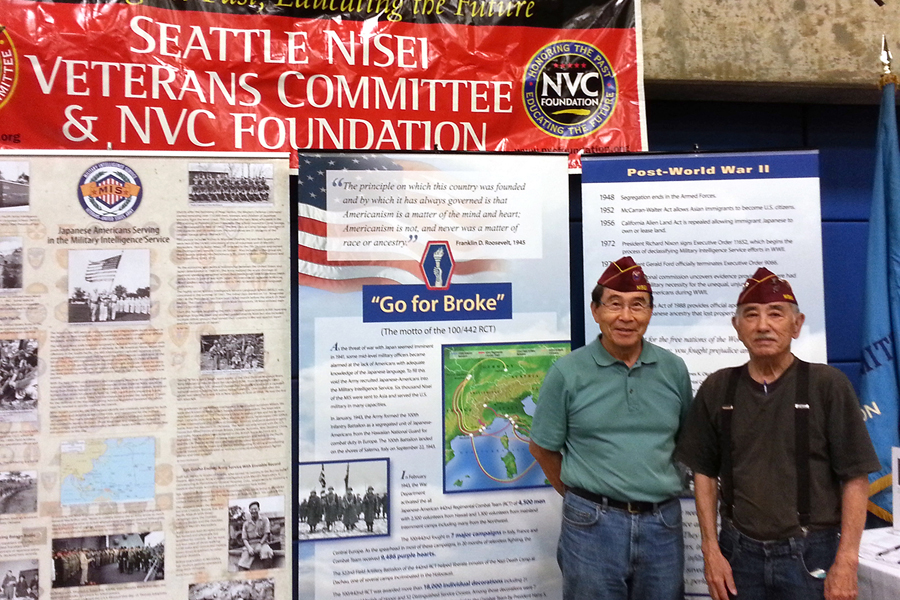 The purpose of the Nisei Veterans Committee (NVC) is to promote and protect the American way of life as guaranteed and set forth by the Constitution of the United States; to perpetuate the historical preservation and sharing of the legacy of the NVC and to carry on the patriotic, social, charitable and educational objectives as originally formed and organized.

Despite their meritorious wartime achievements, the returning World War II Nisei (2nd Generation Japanese American) soldiers faced racial discrimination and prejudice. They were rejected by some Veterans organizations in the Pacific Northwest such as the American Legion and the Veterans of Foreign Wars (VFW). For example, in the spring of 1945 Richard Naito, a disabled veteran, was recuperating from wartime injures at a hospital in Spokane, Washington but was denied membership in the local VFW because of his Japanese ancestry. Also in 1945, the American Legion post in Hood River, Oregon removed the names of the 16 Nisei soldiers from their “Honor Roll”. One of the names removed was that of Frank Hachiya who was killed in action in the Philippines and was awarded the Silver Star for his bravery.

Due to racial discrimination and prejudice, a group of recently discharged Nisei veterans in Seattle who served in the 442nd Regimental Combat Team (442nd) and the Military Intelligence Service (MIS), established the Seattle Nisei Veterans Committee (NVC) on March 25, 1946. Harry Takagi was one of the leaders in establishing the Seattle NVC and in recognition of his leadership, he was elected the first commander. Early NVC leaders included Albert “Lefty” Ichihara, Shiro Kashino, Kick Setsuda, Bill Nishmura, Joe Nakatsu, Joe Hamanaka, and many others who gave the NVC a strong foundation that enabled the organizations to thrive.

One purpose of the NVC was to sustain the strong personal relationships that were formed during the war. These relationships served as a bond for members of the NVC and their families throughout their lives.

The NVC’s constitution and bylaws were adopted on June 2, 1946 and the NVC was established as a veterans’ organization. Many of the founding members were fiercely independent and the constitution and bylaws required the organization to be self-supporting, non-political and independent of outside influence. Membership was open to all honorably discharged veterans who supported the patriotic goals and aspirations of the NVC. The early membership of the Seattle NVC was primarily those who had served in the 442nd because they had returned home earlier than many of these who hand served in the MIS—many MIS soldiers remained in Japan after the war to translate for the war crimes trials.

The NVC Foundation was established in 2005 as a 501-C-3 nonprofit organization to support the Nisei Veterans Committee (NVC) and address the dilemma of declining numbers of veterans in the NVC. It was then decided to create the NVC Foundation with broadened membership to include women, non-veterans and essentially anyone who shared the Foundation mission to continue the NVC legacy. Although tied closely to the NVC, the Foundation is a separate corporate entity with its own officers and Board of Directors.

The NVC Foundation mission statement is to preserve and honor the Japanese American legacies and to provide community programs that meet the educational, cultural and social needs of the broader community.

In keeping with the legacies, a Memorial Wall stands adjacent to the Memorial hall as a tribute to the veterans of WWII and other eras who served their country in time of need in many instances when family members were unjustly incarcerated in internment camps. The Memorial Wall also honors those who waited in the internment camps for the return of their boys who were serving overseas with the 442nd Regimental Combat Team and the MIS.

NVC members, Foundation members and community groups regularly use the Memorial Hall as a convenient and comfortable gathering place for activities and events. The Monthly Speaker Series are held there as part of the Foundation’s education program which also reaches out to students in classrooms, to civic groups and other organizations. A military museum in the Hall further tells the story of the contributions made by the Nisei veterans and veterans of succeeding generations in the history of the United States.

All Foundation programs, activities and events support the Foundation motto: Honoring the Past and Educating the Future.